The Bold and the Beautiful Spoilers: Liam and Hope Weep with Joy Over Baby Beth Reunion – Calm Before Steffy Storm 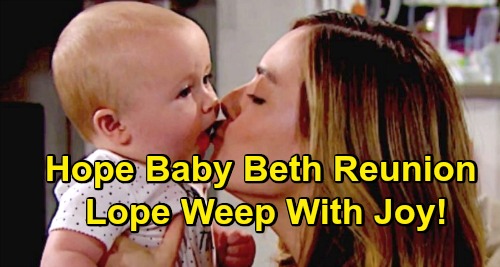 The Bold and the Beautiful (B&B) spoilers tease that Thomas Forrester (Matthew Atkinson) will try to make his getaway with Hope Forrester (Annika Noelle). Once Thomas realizes Liam Spencer (Scott Clifton) has uncovered the truth about Beth Spencer, Thomas will scramble to make his escape. He’ll leave Hope bewildered and terrified with his aggressive behavior.

Thomas will plan to flee with Hope, which will lead to a fierce faceoff a little later. The Bold and the Beautiful spoilers say Liam will go into rescue ranger mode to save Hope from her ruthless husband. Once the madness is finally stopped, Liam will admit what he’s learned through Florence “Flo” Fulton (Katrina Bowden). Hope will be floored to find out Beth is alive!

Liam will eventually reveal that Reese Buckingham (Wayne Brady) swapped their baby for a dead one that night on Catalina Island. He’ll stun Hope by explaining that Thomas knew and remained silent. Hope will be appalled and furious over all the deception, but she’ll also be relieved and overjoyed. There’ll be plenty of emotions swirling around for these rattled parents.

However, the most powerful emotions should come when Liam and Hope share a heartfelt reunion with their child. B&B spoilers say that day will finally arrive on August 6. Hope and Liam will cry happy tears as they hold “Phoebe Forrester” (River Davidson and Madeline Valdez) for the first time knowing she’s actually Beth.

Of course, there’ll be major fallout from this wild revelation, but none of that will matter in this heartfelt moment. Hope has been a train wreck for months over the “death” of her daughter, but that daughter was never dead at all. Liam faced his own struggles with grief and had to watch Hope suffer. Even though he’s bonded with Beth as “Phoebe,” it’ll be different when he learns she’s the baby he lost.