The Bold and the Beautiful Spoilers: Steffy’s Horrific Handoff, Must Give Hope Beth – Faces Phoebe’s Empty Crib and Misery

BY Heather Hughes on July 31, 2019 | Comments: one comment
Related : Soap Opera, Spoiler, Television, The Bold and the Beautiful 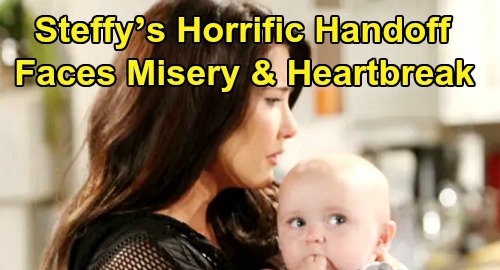 The Bold and the Beautiful (B&B) spoilers tease that a heartbreaking realization is about to hit Steffy Forrester (Jacqueline MacInnes Wood). Once all the details about the bogus adoption come out, the horror will really set in. Steffy won’t want to believe any of this could possibly be true, but it is and she must. She’ll have to accept that Hope Forrester (Annika Noelle) is this sweet little girl’s mother.

From there, we’ll definitely see some conflict. The Bold and the Beautiful spoilers say emotions will be running high, so tempers will flare on both sides.

Hope will just want her baby back, but giving “Phoebe Forrester” (River Davidson and Madeline Valdez) up will be the last thing Steffy wants to do. They’ll argue as the rest of the Forrester and Logan clans get involved in the drama.

However, Steffy will still be in shock at this point. It’ll take a little more time for her to wrap her head around the bombshell and know what must be done. In the end, it looks like Steffy will see the light and determine that this isn’t her child to keep. It’s futile to fight it when all the facts are right there.

B&B spoilers say Steffy will realize she has to give up her beloved adopted daughter, who isn’t legally hers at all. She’ll break down in tears during the week of August 12-16 and fret over this terrible handoff.

Steffy will know Hope deserves to be reunited with Beth. Even so, it’ll be Steffy’s turn for pain of her own. No one will blame her for feeling a little sorry for herself as this nightmare plays out.

First Night Without Baby Phoebe Will Be A Heartbreaking One

Steffy might as well hand Beth over instead of having her forcibly removed due to legal action. That would just be traumatic for Beth, and that’s not what Steffy will want. The Bold and the Beautiful spoilers say Steffy’s first night without Beth is sure to be a devastating experience. She may spend some time staring at “Phoebe’s” empty crib wondering how all this went so horribly wrong.

The Bold and the Beautiful spoilers say things will suddenly shift for Hope and Steffy. Hope’s watched Steffy live in bliss with her baby girl for months. Now Steffy will have to watch Hope raise the daughter she planned to raise herself. This isn’t a blow that Steffy will get over easily.

It sounds like an excruciating ordeal is in Steffy’s future. We’ll give you updates as other B&B news comes in. Stay tuned to the CBS soap and don’t forget to check CDL often for the latest Bold and the Beautiful spoilers, updates and news.