The Bold and the Beautiful Spoilers: 2 Weeks Ahead – Flo, Shauna and Zoe Form Baby Swap Pact After Violent Assault

BY Heather Hughes on April 24, 2019 | Comments: one comment
Related : Soap Opera, Spoiler, Television, The Bold and the Beautiful 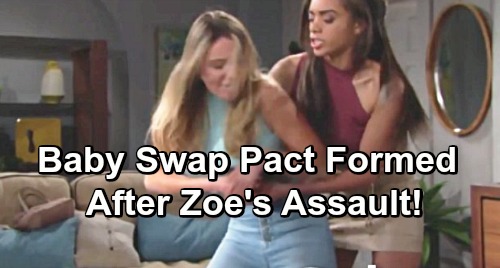 The Bold and the Beautiful (B&B) spoilers tease that a confrontation will lead to some shocking moments. After Zoe Buckingham (Kiara Barnes) is brought in the loop on Florence “Flo” Fulton’s (Katrina Bowden) Logan status, she’ll blow her top. Zoe will realize this situation is far worse than she ever could’ve imagined.

Of course, Dr. Reese Buckingham (Wayne Brady) couldn’t have known Flo would turn out to be Hope Spencer’s (Annika Noelle) cousin. Flo didn’t even know herself. This is just one of those soapy coincidences that makes everyone’s life more difficult, but Zoe will take the news quite hard. She’ll wonder why oh why Flo couldn’t have just left town right after the adoption was finalized.

Flo will defend her decision to stick around, especially now that she knows she has a family. She’ll admit she was welcomed with open arms by the whole Logan crew. Zoe will snap that they’d hate her if they knew the truth. Flo helped Reese hand the baby over to Steffy Forrester (Jacqueline MacInnes Wood) and is letting Hope believe her daughter’s dead. That’s about as low as it gets.

Nevertheless, Zoe will stress how important it is to keep this quiet. She’ll warn that Flo can never breathe a word to the Logans or anyone else, but Flo will have other plans. The Bold and the Beautiful spoilers say she’ll pick up the phone to call Hope, so Zoe will intervene. She’ll try to snatch the phone away, which will lead to Flo slipping and falling into a nearby table.

When Shauna Fulton (Denise Richards) enters to find her daughter unconscious and Zoe looking frantic, she’ll pull out a gun and demand some answers. B&B fans can expect Zoe to provide them, so it won’t be long until Shauna settles down and makes a pact with Zoe. The Bold and the Beautiful spoilers say Flo will wake up and join in this agreement, so they’ll all be on the same page about what they have to do.

This pact will come together during the week of April 29-May 3, but how long will it last? Will Flo be able to put her guilt aside and focus on her new family? Will the baby swap secret be in jeopardy another way? We’ll give you updates as other B&B details emerge. Stay tuned to the CBS soap and don’t forget to check CDL often for the latest Bold and the Beautiful spoilers, updates and news.