BY Heather Hughes on April 24, 2019 | Comments: one comment
Related : Soap Opera, Spoiler, Television, The Bold and the Beautiful 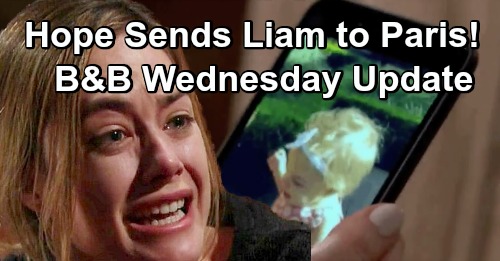 The Bold and the Beautiful (B&B) spoilers update for Wednesday, April 24, tease that Quinn Forrester (Rena Sofer) will drive Sally Spectra (Courtney Hope) up the wall. B&B fans know Quinn was once OK with Sally and Wyatt Spencer (Darin Brooks) as a couple. She didn’t seem to have any major objections, but that all changed when Florence “Flo” Fulton (Katrina Bowden) showed up in town.

Now Quinn’s on a mission to drive Wyatt and Sally apart. She believes Flo is the only woman for Wyatt, which leaves no room for the redhead. The Bold and the Beautiful spoilers say Quinn will shock Sally when she appears out of the blue. She’ll immediately start ranting about Sally’s living arrangement with Wyatt, which will lead to hurled insults and accusations.

Quinn will think Sally needs to accept that they’re just not meant to be. She may contend that Sally and Thomas Forrester (Matthew Atkinson) seemed awfully cozy during their last chat. Quinn might suggest Sally should turn to Thomas again and let Wyatt reunite with his dream girl. She’ll feel confident that Flo can make Wyatt far happier than Sally ever could.

Of course, Quinn won’t really care where Sally goes or which man she ends up with. She’ll just want to give Sally a one-way ticket out of her son’s life. Wyatt’s future is all that matters to Quinn, so she’ll do whatever she can to put him with best woman – at least in her opinion!

While Sally and Quinn spar, Hope Spencer (Annika Noelle) will be crushed over the video she just watched. Thomas roped Amelia (Nicola Posener) into his plan, so he scored a devastating recording. It broke Hope’s heart to watch little Kelly Spencer (Zoe Pennington and Chloe Teperman) call out for her dad.

Thomas insisted that Liam Spencer (Scott Clifton) has to be with his family, so it’ll be Hope’s turn to chime in on Wednesday. She’ll completely agree that the situation is critical. Hope will make it clear to Liam that this visit needs to happen, and it needs to happen now.

The Bold and the Beautiful spoilers say Liam will take a look at the video himself and back Hope up. He’ll hate the idea of the girls missing him, so he’ll decide to head for Paris soon. Thomas will be ecstatic once Liam’s gone and left Hope’s vulnerable. He’ll think this is just the chance he needs to truly win Hope over.

It sounds like the drama’s about to heat up, so stay tuned. We’ll give you updates as other B&B news comes in. Stick with the CBS soap and don’t forget to check CDL often for the latest Bold and the Beautiful spoilers, updates, and news.