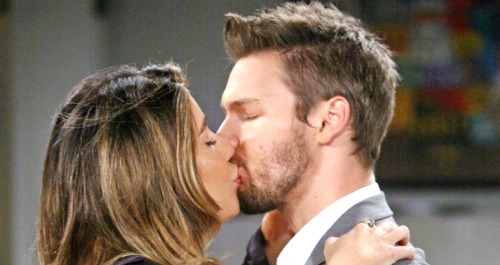 The Bold and the Beautiful (B&B) spoilers tease that Liam Spencer (Scott Clifton) will soon be on his way to Paris. He’s been adamant that his place is with Hope Spencer (Annika Noelle), who he previously thought needed him more than Kelly Spencer (Zoe Pennington and Chloe Teperman) and “Phoebe Forrester” (Isabella de Armas and Redford Prindiville). Liam truly wanted to stay in LA and focus on his marriage.

However, all that will change thanks to Thomas Forrester’s (Matthew Atkinson) trickery. The video he stages with the help of Kelly and “Phoebe’s” nanny, Amelia, will change Liam’s mind. Of course, Hope will be part of convincing Liam as well. She’ll want Liam to see just how much the girls need him, and Liam will agree that maybe he misjudged the situation.

Thomas is hoping that while Liam’s out of town, he can use that time to grow closer to Hope. There’s a good chance Thomas will indeed be able to do that, but an even bigger benefit could come out of this. B&B fans know Liam is the eternal waffler. He’s a man who can never stick with one woman for very long, so going off to Paris and hanging out with an ex he still has feelings for could be dangerous.

Will Liam be able to stay faithful to Hope? Could he cheat while he’s away? No one would be surprised considering Liam’s history and the current problems in his relationship. The Bold and the Beautiful spoilers say Liam will inevitably reconnect with Steffy Forrester (Jacqueline MacInnes Wood) while he’s in Paris, which could lead to rekindling their romance in more ways than one.

Naturally, this would be something that happens offscreen and might be revealed later. Wood is still on maternity leave, but that doesn’t mean Liam won’t come back acting a bit odd and distant. That could easily be the case and set up a flashback that comes somewhere down the line.

Bottom line, The Bold and the Beautiful spoilers say the show has the prime opportunity for drama here. Will they take advantage of it? Will Liam betray Hope and regret it afterward? Will he hook up with Steffy and keep it a secret?

B&B viewers won’t want to miss the twists and turns ahead. We’ll give you updates as other news comes in. Stay tuned to the CBS soap and don’t forget to check CDL often for the latest Bold and the Beautiful spoilers, updates, and news.