BY hellodrdavis on April 23, 2019 | Comments: one comment
Related : Soap Opera, Spoiler, Television, The Bold and the Beautiful 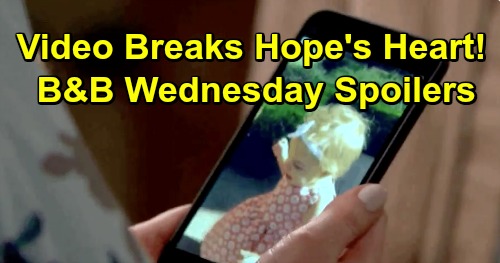 The Bold and the Beautiful spoilers for Wednesday, April 24, tease that Hope Spencer (Annika Noelle) will find herself shattered. Thomas Forrester (Matthew Atkinson) has just shown her a video of Kelly Spencer (Chloe Teperman and Zoe Pennington) calling out for her “da-da.” And according to Thomas, the video shows just how much Kelly misses and needs Liam Spencer (Scott Clifton).

Of course, Hope and Liam have just spent time together reconnecting and making love, so they were in a really good place. But now, it looks like Hope may take a giant step backwards and start once again obsessing over keeping Liam away from his family.

This will likely lead to another major conversation between Hope and Liam, during which Hope insists that Liam go see Kelly, Phoebe Forrester (Isabella de Armas and Roasalind Aune), and Steffy Forrester (Jacqueline MacInnes Wood). And according to B&B spoilers, Liam will indeed make plans to travel to Paris to see his “other family.”

Meanwhile, on the new episode of B&B on Wednesday, April 24, Quinn Forrester (Rena Sofer) will continue with her plot to rip Wyatt Spencer (Darin Brooks) and Sally Spectra (Courtney Hope) apart. Quinn spotted Sally embracing Thomas at Forrester Creations, and she ran right to Wyatt to inform him about Sally’s “indiscretion.”

But Wyatt was nonchalant about the whole thing. He trusts Sally and doesn’t believe his mother that Sally was involved in a compromising moment with Thomas. Rather, he assumed that Quinn misunderstood what she saw (which is true) and he brushed off the embrace as no big deal.

On Wednesday’s B&B episode, Quinn will go directly after Sally. The Bold and the Beautiful spoilers say that Quinn will totally take Sally off guard with an attack over her living arrangements with Wyatt. Perhaps Quinn will insinuate that Sally is freeloading off of Wyatt, or that she should be able to afford her own place by now.

Sally won’t be impressed with Quinn’s insults, and she’ll probably tell Quinn that her living arrangements are none of her business. But Quinn won’t be inclined to back down, since what she wants more than anything is for Wyatt to dump Sally and start dating Florence “Flo” Fulton (Katrina Bowden) again.