BY Marcy Cohen on April 23, 2019 | Comments: one comment
Related : Soap Opera, Spoiler, Television, The Bold and the Beautiful 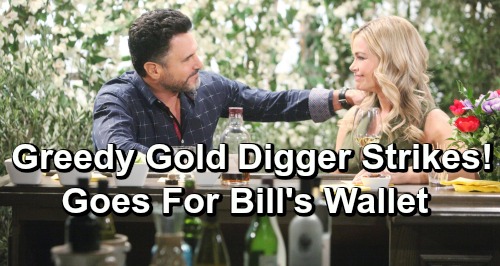 The Bold and the Beautiful (B&B) spoilers tease that Bill Spencer’s (Don Diamont) hunch will prove correct. When Bill learned Florence “Flo” Fulton (Katrina Bowden) might be his daughter, he acted like Shauna Fulton (Denise Richards) was nothing more than a gold digger. Bill dodged a bullet when Flo was proven to be Storm Logan’s (William deVry) kid, but it seems his initial instincts were spot-on.

Later this week on B&B, The Bold and the Beautiful spoilers say Shauna’s money-grubbing side will come out. Flo will worry about the huge baby secret that continues to weigh on her. She just won’t be sure she can stand lying to Hope Spencer (Annika Noelle) forever, especially now that she knows they’re cousins.

However, Shauna will insist their family connection is just another reason to stay quiet. She’ll mention how much Brooke Forrester’s (Katherine Kelly Lang) house might be worth and contend that Flo may inherit it one day.

Flo will point out that a lot of Logans would have to die first, but Shauna will still think her daughter will get a decent piece of the pie.

Flo will remain on the fence about telling Hope the truth, but Shauna will definitely cast her vote for staying silent. She’ll feel like Flo and Hope’s bond can flourish, but only if Flo keeps her mouth shut.

Later, Shauna’s gold-digging tendencies will shine through once again. She’ll approach Bill at Il Giardino and realize he’s a bit down in the dumps over Katie Forrester’s (Heather Tom) rejection.

The Bold and the Beautiful spoilers say Shauna will use that to her advantage as she gets Bill to open up. She’ll also wonder what Bill would’ve done if Flo had turned out to be his daughter.

Bill will admit he would’ve taken care of Flo. He’ll note that he would’ve purchased a house for Flo and Shauna, so the wheels may start turning for this manipulative mom.

Shauna will do her best to preserve Flo’s shot at wealth and happiness, but she could find her own shot through Bill. Will she pursue “Dollar Bill” and hope she can be set for life?

We’ll give you updates as other B&B news comes in. Stay tuned to the CBS soap and don’t forget to check CDL often for the latest Bold and the Beautiful spoilers, updates, and news.