BY Heather Hughes on April 23, 2019 | Comments: one comment
Related : Soap Opera, Spoiler, Television, The Bold and the Beautiful 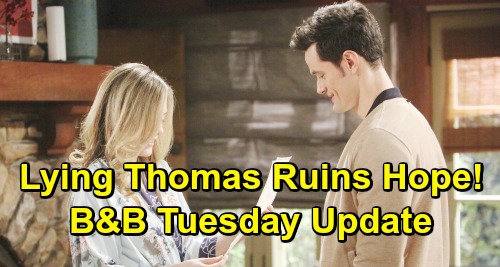 The Bold and the Beautiful (B&B) spoilers for Tuesday, April 23, tease that Quinn Forrester (Rena Sofer) will rev up her “Wally” destruction efforts. She hasn’t really targeted Sally Spectra (Courtney Hope) and Wyatt Spencer (Darin Brooks) so far, but she’s definitely made her preference for Florence “Flo” Fulton (Katrina Bowden) known. Now Quinn’s about to start plotting an official split.

When Quinn witnesses a warm embrace between Sally and Thomas Forrester (Matthew Atkinson), she’ll pounce on the opportunity. Quinn will make a beeline for Wyatt and rant about Sally betraying him. She’ll insist that if Thomas and Sally aren’t involved again already, they will be soon. Quinn will argue that Wyatt’s wasting his time with a woman who’s disloyal and undeserving of his love.

Of course, Wyatt will push Quinn to calm down and see that there may be another side to this. He’ll think the hug might’ve been an innocent gesture between old friends. After all, Wyatt and Flo have certainly shared some close moments – including kisses – during their private times together. He’ll refuse to jump to conclusions about Sally cheating, but he’ll begin to doubt her loyalty later.

Other Bold and the Beautiful spoilers say Hope Spencer (Annika Noelle) will finally take the plunge. With plenty of reassurance from Liam Spencer (Scott Clifton), Hope will feel safe enough to make love. Liam will be over the moon about this form of reconnection. He’ll feel like they’re on the right track, so he’ll rush to tell Wyatt the good news.

Meanwhile, Thomas will contact the nanny Steffy Forrester (Jacqueline MacInnes Wood) took with her to Paris. Amelia (Nicola Posener) has been caring for Kelly Spencer (Zoe Pennington and Chloe Teperman) and “Phoebe Forrester” (Isabella de Armas and Redford Prindville), but she’ll be tasked with a special project on Tuesday’s B&B episode. Thomas will need Amelia’s help with his sneaky “Lope” breakup plan.

Afterward, Thomas will pretend Douglas Forrester (Henry Joseph Samiri) drew a picture for Hope. He’ll touch her heart through the sketch and break it into a million pieces with a video from Amelia. It turns out Amelia will coax Kelly into calling for her daddy and hit the record button. The Bold and the Beautiful spoilers say the footage will bring a crushing blow.

Thomas will contend that the girls desperately need Liam, so Hope will become more convinced than ever that Liam must be with them. Even Liam will think so when he watches the video for himself later this week! We’ll give you updates as other B&B details emerge. Stay tuned to the CBS soap and don’t forget to check CDL often for the latest Bold and the Beautiful spoilers, updates, and news.