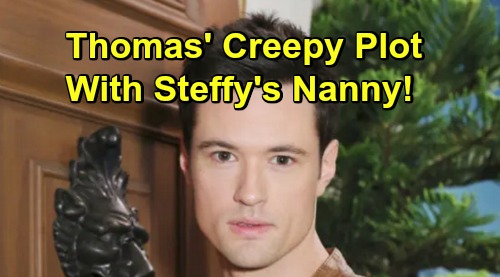 The Bold and the Beautiful (B&B) spoilers tease that Thomas Forrester (Matthew Atkinson) will do whatever it takes to win Hope Spencer’s (Annika Noelle) heart. He won’t hesitate to use some sneaky tactics to get what he wants. In Thomas’ mind, he won’t be breaking up a marriage. Thomas will think he’s simply righting some wrongs in the romance department.

Thomas will tell himself that coming in between Hope and Liam Spencer (Scott Clifton) will work out for everyone. Like Dr. Taylor Hayes (Hunter Tylo), B&B spoilers say Thomas just won’t see the downside here. He’ll believe he can make Hope happy and get her love in return. That would leave Liam to reunite with Steffy Forrester (Jacqueline MacInnes Wood) and the girls.

Thomas will justify his shady actions by believing he’s just going to put a family back together. To be fair, Liam and Steffy would probably still be together right now if Bill Spencer (Don Diamont) hadn’t made a mess of things. Nevertheless, everyone made mistakes and Thomas will think he can correct them. He’ll resolve to play dirty if that’s what it takes to drive Liam and Hope apart.

The Bold and the Beautiful spoilers say part one of Thomas’ plan will involve a sketch. He’ll doodle something and claim it’s from Douglas Forrester (Henry Joseph Samiri), so he’ll try to tug at Hope’s heartstrings. Thomas won’t care how he reels Hope in as long as it works. Of course, it’ll take more than that to destroy “Lope.” That’s why Thomas will focus on Liam’s side of things as well.

Thomas will call up Amelia (Nicola Posener), who’s a nanny to Kelly Spencer (Zoe Pennington and Chloe Teperman) and “Phoebe Forrester” (Isabella de Armas and Redford Prindiville). Since Thomas and Amelia apparently have a bit of a history, he’ll be able to talk her into helping him. Amelia will get Kelly on video asking for “Dada,” so Thomas will later show the video to Liam and guilt-trip him into visiting the girls.