The Bold and the Beautiful Spoilers: Steffy Realizes Steam Mistake Too Late – Hope Pregnant Again When Steffy Wants Liam Back?

BY Heather Hughes on March 13, 2019 | Comments: one comment
Related : Soap Opera, Spoiler, Television, The Bold and the Beautiful 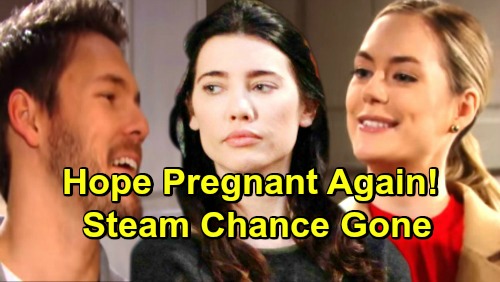 The Bold and the Beautiful (B&B) spoilers tease that Steffy Forrester (Jacqueline MacInnes Wood) may do some pining in Paris. It’s obvious she still wants to be with Liam Spencer (Scott Clifton), but she doesn’t think that’s the right call. It’d be cruel to reunite with Liam when Hope Spencer (Annika Noelle) is still so distraught over Beth Spencer’s “death.” Hope desperately needs her husband’s support right now.

After she does some soul-searching, Steffy may determine that she should’ve snatched Liam up while she had the chance. Once Jacqueline MacInnes Wood’s maternity leave is over and Steffy returns to Los Angeles, Liam should be the reason why.

Steffy will naturally want Kelly Spencer (Zoe Pennington and Chloe Teperman) to be around her dad and “Phoebe Forrester” (Isabella de Armas and Redford Prindiville) to be around her father figure. Of course, B&B fans know Liam is actually a papa to both of them. He just doesn’t know that yet!

It’ll be a while before the truth comes out, but Steffy’s eventual return may be about her reunion with Liam. Will Steffy come back on a mission to get back together? Will she secretly hope “Lope’s” marriage fell apart in her absence? If Steffy heads home and plans to reunite with her beloved ex, she may run into some snags.

There’s been a lot of talk about Hope having another child on The Bold and the Beautiful. She’s adamant that motherhood doesn’t seem to be in the cards for her, but Florence “Flo” Fulton (Katrina Bowden) pushed Hope to try again. Liam also believes Hope would make a great mom someday.

Without “Phoebe” and Kelly around, Hope may eventually decide they’re right. She could try to get pregnant once more and fill this hole in her heart. Will Hope be expecting when Steffy comes home? Will Steffy’s reunion efforts be derailed because of a new bun in the oven? That could create some unexpected twists in all the baby swap drama.