The Bold and the Beautiful Spoilers: Taylor and Ridge Horrified By Steffy’s Paris Move – Insist Daughter Stay and Fight For Liam

BY hellodrdavis on March 11, 2019 | Comments: 2 comments
Related : Soap Opera, Spoiler, Television, The Bold and the Beautiful 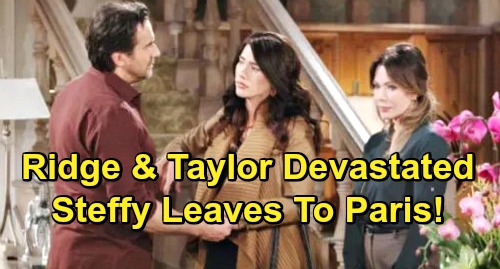 The Bold and the Beautiful spoilers tease that Steffy Forrester (Jacqueline MacInnes Wood) will soon make a shocking decision. She’ll decide that she’s had enough of being in the middle of Hope Spencer (Annika Noelle) and Liam Spencer’s (Scott Clifton) marriage, as she can’t seem to get any peace. All she wants is to peacefully exist with her girls, but she keeps getting drawn in to Hope and Liam’s drama. So, she’ll pack up the girls and head for Paris.

But this decision will send shockwaves throughout her family. Hope and Liam will be floored by Steffy’s decision to get away. Liam will have to adjust to the fact that he’ll away from Kelly Spencer (Chloe Teperman and Zoe Pennington) for a while, and Hope will be utterly devastated that she won’t be able to see Phoebe Forrester (Isabela de Armas and Redford Prindiville) on a regular basis.

But they won’t be the only ones to object to Steffy’s plan. It looks like Ridge Forrester (Thorsten Kaye) will voice his objection as well. He probably won’t think it’s right for Steffy to have to leave just because Hope and Liam are having problems, but Steffy will insist it’s for the best. She’ll want to give Lope a chance to work on their marriage and grieve for Beth Spencer in the absence of the distraction of her and the girls.

Taylor Hayes (Hunter Tylo) won’t be happy about Steffy’s decision, either. First and foremost, she’ll miss Steffy and the girls, but she’ll also have her daughter’s happiness on her mind. Taylor will object to Steffy’s decision on the grounds that Steffy is putting Lope’s marriage above her own happiness.

Of course, Steffy won’t see it that way, but Taylor will probably point out that Steffy could stay and at least consider Hope’s offer to let her and Liam get back together. Taylor thinks that Steffy should fight for her own family, which includes Liam, rather than doing something that will make it easier for Hope and Liam to patch up their difficulties.

But Steffy will be determined to remove herself from Hope and Liam’s drama once again, and frankly she’ll want to get her girls away from the drama. Steffy’s had about enough of Hope popping by the house and causing scenes with Liam or obsessing over Phoebe. She just needs to get away, and nothing will stop her.

Do you think Steffy’s doing the right thing by taking the girls to Paris for a while? Stay tuned to the CBS soap and don’t forget to check CDL often for the latest Bold and the Beautiful spoilers, updates, and news.