The Bold and the Beautiful Spoilers: Wyatt’s Connection With Flo Ties To Unexpected Phoebe Reveal 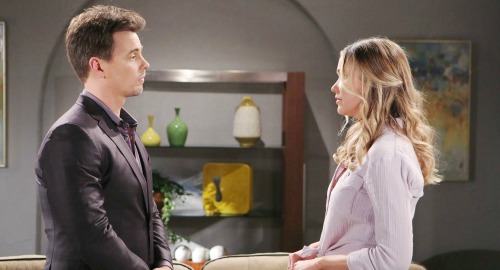 The Bold and the Beautiful spoilers tease that Wyatt’s (Darin Brooks) expanded backstory is tying into the upcoming Lope baby reveal. Flo (Katrina Bowden) was touched that her former high school sweetheart offered to help pursue her father’s identity. Surely the renewed feelings Miss Fulton has will eventually result in a purge about all things Phoebe and enable a tie to this reveal.

Thinking many steps ahead, that’s what savvy soap fans do. So, why did B&B purposely write Flo as Wyatt’s ex?

Sally (Courtney Hope) came back to the show after it seemed like she’d been written out, when her likable Spectra Fashions gang was actually discarded as part of a partial sendoff. It would be cool to see that trio return now that Eric (John McCook) has green-lighted Sally’s career at Forrester Creations.

Brooks’ terrific sense of humor plays strongly into his character, as is particularly evidenced in the light-hearted scenes between Wyatt and Sally. Compare those moments to the couple’s scenes when Wyatt was with Katie (Heather Tom). Yes, the common denominator between Batie and Wally’s jokes is Brooks himself.

So, how does Sally and Wyatt’s newer romance figure into the Flo connection and the reveal noted? A triangle was just created, that being Sally on the new side, Wyatt as the bridge between now and then, and Flo being a renewed face from the past.

Sally’s famous temper was famously demonstrated when she shot Sky, which was Bill’s (Don Diamont) since dismissed mock vanity skyscraper. Of course Miss Spectra will catch onto Flo’s restored fondness, if not outright love for Wyatt. Imagine what happens if (when) Sally learns what Flo did for Reese (Wayne Brady) and that a monetary amount was involved.

The potential for Sally to become the person who blows the whistle about Phoebe’s identity and how that connects to Flo’s past actions is immense. Whether this tie also factors into whoever is Flo’s dad is another soapy issue, but also one that can be imagined as baked into developing scripts.

And then there’s Quinn (Rena Sofer), who sees Sally as a problem to be overcome. Flo is a perceived angel, who’s mother, Shauna (Denise Richards), is set to debut in this fictional version of Los Angeles.

Quinn would seem primed to help Flo when the Phoebe reveal happens. But if Sally doesn’t act on impulse, she might up her standing in Quinn’s eyes.

Of course, Wyatt will be conflicted in the projected Sally-Flo battle. Hopefully, he won’t cross any major Wally relationship line either. Doing so would complicate loyalties even further and could also muddy the Phoebe reveal as it relates to his brother, Liam (Scott Clifton), Hope (Annika Noelle), and Steffy (Jacqueline MacInnes Wood).

CDL is a leading source for everything linked to The Bold the Beautiful. Check back regularly for B&B spoilers and news!