BY hellodrdavis on April 3, 2019 | Comments: one comment
Related : Soap Opera, Spoiler, Television, The Bold and the Beautiful 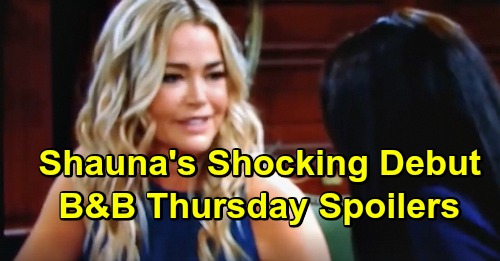 The Bold and the Beautiful spoilers for Thursday, April 4, tease that Wyatt Spencer (Darin Brooks) will continue his conversation with Florence “Flo” Fulton (Katrina Bowden) about her parentage. Flo has gone her whole life without knowing her father’s identity, and until now she hasn’t given him much thought. In fact, it seems that she and her mother have never broached the topic before.

But now that Flo has reconnected with Wyatt, things are different. Flo has seen just how much better Wyatt’s life has become since he found Bill Spencer (Don Diamont), and there’s a part of her who would like that for herself, too. Of course, she has no idea whether her father would be rich or poor, or even still alive, but she’ll feel like she has to try.

And so, with Wyatt’s support, Flo will give her mother a call. And that’s how Shauna Fulton (Denise Richards) will make her grand entrance to B&B. For Shauna, this may be the call she’s been dreading for years from her daughter. According to B&B spoilers, Shauna won’t be immediately forthcoming with Flo about her father’s identity, and it looks like she’ll immediately fly to Los Angeles instead.

Meanwhile, on the new episode of B&B on Thursday, April 4, Hope Spencer (Annika Noelle) will spend some more time with Douglas Forrester (Henry Joseph Samiri) and Thomas Forrester (Matthew Atkinson). Douglas has developed a special closeness to Hope and even talked her into taking him skateboarding one of these days.

It looks like the special connection between Hope and Douglas will continue to grow, as Douglas gains comfort from Hope in the wake of his mother’s death. And B&B spoilers say that Thomas will certainly notice the connection, and that he’ll feel a closeness to Hope as well as he watches his young son interact with the grieving mother.