BY hellodrdavis on April 22, 2019 | Comments: one comment
Related : Soap Opera, Spoiler, Television, The Bold and the Beautiful 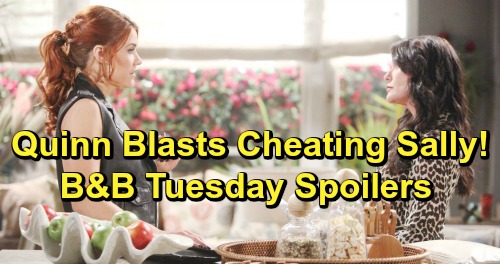 The Bold and the Beautiful spoilers for Tuesday, April 23, tease that Sally Spectra (Courtney Hope) will be on the receiving end of Quinn Forrester’s (Rena Sofer) wrath. Sally has been enjoying a content and romantic relationship with Quinn’s son Wyatt Spencer (Darin Brooks), and so far there have been no major hiccups in their relationship.

But in typical fashion, Quinn will start causing problems for the happy couple. Quinn wants nothing more than for Wyatt and Florence “Flo” Fulton (Katrina Bowden) to get together, and that can’t happen while Sally is in the picture. So, Quinn will ramp up her efforts to undermine Sally’s relationship with Wyatt.

According to B&B spoilers, Quinn will spot Sally with Thomas Forrester (Matthew Atkinson). Thomas has just confided in Sally about his love for Hope Spencer (Annika Noelle), and Sally provided her advice and counsel. On Tuesday’s episode, they’ll continue their conversation, which will culminate with a hug, and that’s what Quinn will see.

The Bold and the Beautiful spoilers indicate that Quinn will use what she’s seen to her advantage. She’ll corner Sally and confront her about the hug. She’ll even go so far as to question Sally’s loyalty to Wyatt. This will surely infuriate Sally, but she won’t be able to spill what their conversation was really about, since she swore to Thomas that it was just between them.

It looks like this will be just the beginning of Quinn’s plot to destroy Sally and Wyatt’s relationship. According to B&B spoilers, her next move will be to run to Wyatt and inform him about the “inappropriate” contact between Sally and Thomas. Luckily, Wyatt won’t get all whipped up about the news, which should irk Quinn.

Meanwhile, on the new episode of B&B on Tuesday, April 23, Hope and Liam Spencer (Scott Clifton) will continue their serious discussion. They’ve covered a lot of ground, discussing the effect of Hope’s grief and distance on their marriage. But Hope agreed to give some romance a try, so we should see these two enjoy their romantic dinner after all.

B&B spoilers also indicate that Liam and Hope will make love, so it seems that their relationship will be back on the right track. Previously, Hope wasn’t sure that she was ready for that step, but she’ll have a change of heart as the evening progresses and decide to put her marriage first.