The Bold and the Beautiful Spoilers: Thomas Wants Hope No Matter The Cost – Will He and Taylor Destroy Lope?

BY hellodrdavis on April 22, 2019 | Comments: one comment
Related : Soap Opera, Spoiler, Television, The Bold and the Beautiful 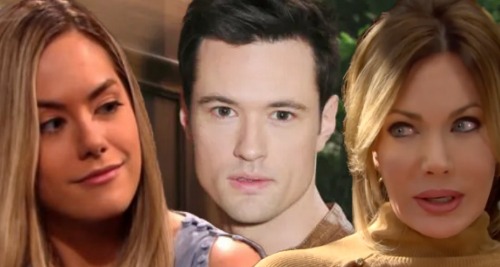 The Bold and the Beautiful spoilers tease that Thomas Forrester (Matthew Atkinson) will soon embark on a sneaky plan. He has been spending a lot of time lately with Hope Spencer (Annika Noelle), and Hope has bonded strongly with his son Douglas Forrester (Henry Joseph Samiri). Douglas recently lost his mom Caroline Spencer (Linsey Godfrey) and he’s really taken to Hope as a mother figure.

Thomas has certainly noticed Hope’s connection to Douglas, and according to B&B spoilers, he’ll decide that he’d like to have Hope as a permanent mother figure to Douglas. Thomas and Hope were romantically involved a few years back, and as Thomas recently told Ridge Forrester (Thorsten Kaye), he never really got over those feelings.

Now that Thomas has his sights set on Hope, he’ll get pretty devious in his plan to get her away from Liam Spencer (Scott Clifton) and all to himself. The Bold and the Beautiful spoilers say that he’ll first target Hope’s strong feelings toward Douglas. Thomas will approach Hope with a drawing that he claims was made for her by Douglas, when in reality, Thomas will have made the drawing himself.

The exact nature of the drawing remains to be seen, but since B&B spoilers indicate that it will tug at Hope’s heartstrings, it will likely be a picture of Hope and Douglas together, or something similar. Hope will be touched by the gesture, which will have the desired effect.

Next, Thomas will work to directly undermine Hope’s marriage to Liam. Thomas knows that Hope feels terribly guilty about Liam being apart from Kelly Spencer (Chloe Teperman and Zoe Pennington) and Phoebe Forrester (Isabella de Armas and Redford Prindiville), so he’ll play on that. He’ll arrange for Steffy Forrester’s (Jacqueline MacInnes Wood) nanny to arrange a video chat with Hope.

Of course, the goal here will be to intensify Hope’s feelings of guilt over Liam being apart from the girls, so that she strongly urges Liam to pack up and head to Paris. That would serve Thomas’ needs just fine, as he’d then be able to spend more time with Hope alone. Plus, he’d be putting Liam with Steffy, which he’ll hope will strengthen the bond between those two.

In the end, Thomas will have the same goal as his mother, Taylor Hayes (Hunter Tylo). B&B viewers will recall that before Taylor left for Paris to be with Steffy, she indicated her desire for Thomas and Hope to pair up, so that Liam and Steffy could reunite. It seems that mother and son now have the exact same goals.

It will be interesting to see what happens when Taylor and Steffy eventually return from Paris. We just might see Thomas and Taylor team up and combine their efforts in destroying “Lope” and reigniting “Steam.” Do you think we’ll see them combine their efforts to get what they want? Stay tuned to the CBS soap and don’t forget to check CDL often for the latest Bold and the Beautiful spoilers, updates, and news.