BY Sean O'Brien on March 17, 2019 | Comments: one comment
Related : Soap Opera, Spoiler, Television, The Bold and the Beautiful 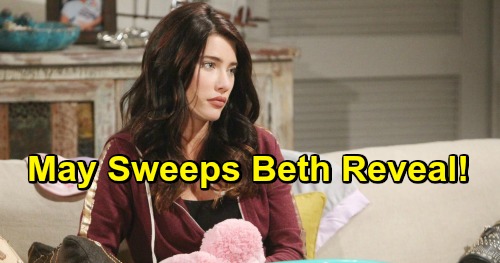 The Bold and the Beautiful spoilers tease that Phoebe’s reveal can’t happen now. Steffy’s (Jacqueline MacInnes Wood) European trip, which was spurred by Wood’s real life birth of her first child (Rise), means that Phoebe and her sister, Kelly (Zoe Pennington), won’t be in Los Angeles for awhile.

Flo (Katrina Bowden) was on the precipice of coming clean about the sordid crimes involved in Beth’s faux demise. Bowden’s character was filled with disgust about what Reese (Wayne Brady) did and planned to tell Hope (Annika Noelle) and Steffy what really happened on Catalina island during that dark and stormy night.

As B&B viewers recall, Reese’s gambling obsession created his two-hundred thousand dollar debt. The corrupt bookie (what other type exists?) sent a henchman to get Zoe (Kiara Barnes) as a form of recompense. Soap came into play, as the bookie gave Reese extra time to raise the money, which resulted in the baby-swap scheme.

Reese’s contemptible actions involved a romantic accomplice, which is how Bowden’s intriguing character was written into the storyline. Flo’s willingness to go along with Reese was linked to the strong feelings she held for the bad doctor. Those emotions have since evaporated as the full weight of all that’s transpired and meeting Hope face-to-face came to pass.

A questionable plot point caused Reese to not ask Taylor (Hunter Tylo) for the money. He knew she had plenty of capital and, like Flo, was sweet on him. Yet, he still opted to claim that the deceased child of a woman who happened to be at the clinic on the same night Hope actually did deliver a health baby was Lope’s.

Zoe entered the story with her British accent and defense of her father in order. Now, working without her classy enunciation, Barnes’ alter ego is conflicted. She recently agreed to bend to Flo’s plan to tell the truth, but was then swayed by a returning Reese, who flew back from across the pond.

Ah, wait, that could be part of how this pickle is peeled? Steffy leaves LA to check in with Forrester’s European division. Reese has ties in that part of the world.

Might B&B be establishing a link whereby Steffy gains information about Dr. Buckingham she wouldn’t have otherwise had during her trip? Instead of the reveal taking place in LA, sometime after Steffy and the girls return, it takes root on the continent of Europe and then blooms later this spring. May Sweeps would then seem like an opportune time for all to be revealed, as Wood and child actors will likely be returning to the set, or will already be back.