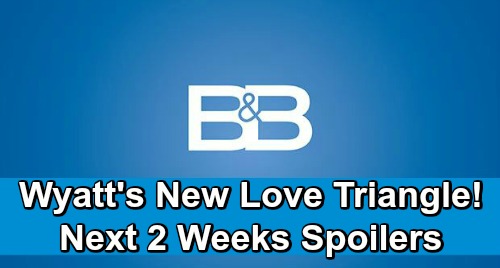 The Bold and the Beautiful (B&B) spoilers for the next two weeks tease that we’ll see plenty of bonding. During the week of April 22-26, Liam Spencer (Scott Clifton) will manage to pull Hope Spencer (Annika Noelle) closer. After their romantic evening together, Hope will try to take a few steps forward. She’ll make love to Liam on the sofa and assure him that she still wants a happy marriage.

Meanwhile, Thomas Forrester (Matthew Atkinson) will give Sally Spectra (Courtney Hope) the scoop on his plan. He’ll want to tear Liam and Hope apart so he can have Hope for himself, but Sally will try to talk him out of it. When Sally expresses so much disapproval, Thomas will dig a little deeper and push Sally to understand his perspective. They’ll end up sharing a warm embrace by the end of their chat.

Naturally, Quinn Forrester (Rena Sofer) will witness this hug and run off to tell Wyatt Spencer (Darin Brooks). She’ll argue that Sally’s drifting back toward Thomas and push Wyatt to drift toward his ex as well. Wyatt will admit that part of him will always love Florence “Flo” Fulton (Katrina Bowden), but he’ll want his mom to butt out. He won’t like seeing her manipulative side come out again.

Nevertheless, Wyatt will wonder if Quinn’s right on some level. He’ll discover that Thomas and Sally have been texting, so he certainly won’t appreciate that. Elsewhere, Thomas will employ some manipulation tactics to strengthen his connection with Hope and push Liam out of town for a while. Everything will work like a charm, so Thomas will be feeling awfully smug about his chances with Hope.

Next, Bill Spencer (Don Diamont) will make a pitch to Katie Logan (Heather Tom). It looks like he’ll be ready to take the leap and be a family again, but Katie won’t be down for that yet. The Bold and the Beautiful spoilers say Katie’s rejection will sting, so Bill will confide in Shauna Fulton (Katrina Bowden) at Il Giardino.

Later, Donna Logan (Jennifer Gareis) and Brooke Forrester (Katherine Kelly Lang) will urge Katie to go for a “Batie” reunion. They’ll argue that Bill’s truly a better man now, so Katie will change her mind about giving him another shot. Over with Flo, she’ll plan to come clean until Zoe Buckingham (Kiara Barnes) gets in her way. Shauna will join the violent party after Zoe assaults Flo to keep her quiet.

Zoe will soon realize the tables have turned when Shauna pulls a gun! That’ll set up some great B&B Friday cliffhanger drama as we move into the week of April 29-May 3. Once that situation’s resolved, Flo will obviously keep her mouth shut. She’ll end up getting a surprising offer from Hope, so maybe her cousin will need her help at Hope for the Future.

Xander Avant (Adain Bradley) will also make a vow to Zoe that week. Will she break down and tell him at least part of the story? Will Xander promise to protect Zoe or will his promise be something less shocking? It’s possible it’ll simply be something romantic, so stay tuned.

Finally, The Bold and the Beautiful spoilers say Thomas will open up to Sally. He may make progress on his plot to win Hope over and provide updates. Naturally, a bit of a love triangle could brew in the process! We’ll keep you posted as other B&B news comes in. Stick with the CBS soap and don’t forget to check CDL often for the latest Bold and the Beautiful spoilers, updates, and news.