BY hellodrdavis on April 21, 2019 | Comments: one comment
Related : Soap Opera, Spoiler, Television, The Bold and the Beautiful 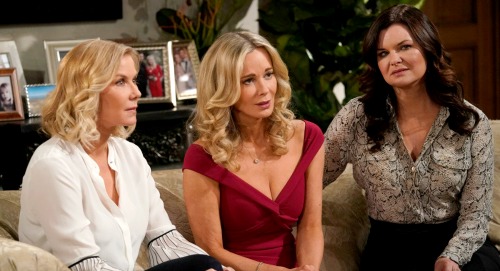 The Bold and the Beautiful spoilers tease that things may start to get uncomfortable between Florence “Flo” Fulton (Katrina Bowden), Steffy Forrester (Jacqueline MacInnes Wood), and the Logan sisters. Flo has just learned that she’s Storm Logan’s (William deVry) daughter, and that makes her a bona fide Logan. She’ll be welcomed into the Logan clan, and her life will start to change dramatically.

At first, there will probably be a great celebration. After all, Katie Logan (Heather Tom), Brooke Forrester (Katherine Kelly Lang), and Donna Logan (Jennifer Gareis) will be thrilled to know that their beloved brother left behind a daughter. They thought that Storm didn’t leave a legacy behind, but now they’ll have Flo.

Of course, the Logan sisters already know about Flo, but they knew her simply as Phoebe Forrester’s (Isabella de Armas and Redford Prindiville) birth mother. In fact, they recently had a “sisters” conversation during which Brooke expressed some concern about Flo and Hope Spencer (Annika Noelle) spending time together.

But now, Flo will certainly be spending time with Hope, as well as the rest of the Logan family. She’ll become a permanent fixture in the Logan family, and this will likely raise questions about Phoebe. As far as everyone knows, Flo is Phoebe’s birth mother. This will make Phoebe a Logan in everyone’s eyes. And that’s going to complicate family relations greatly.

They may think that it will be weird for Steffy to be raising Phoebe now that Flo’s a part of the family. The Logans and the Forresters are intimately connected, and so that means that Flo and Steffy will run in the same circles and Flo will constantly be around Phoebe. Steffy might not want Flo to be around Phoebe going forward, and this could cause some serious family conflict.

One things’s for sure – if a Logan so much as suggests that it’s improper for Steffy to be raising Flo’s daughter given everything that’s happened, then Steffy will likely explode. It would be a bad scene and a recipe for a major family war.

Do you think that there will be family conflict over who should be raising Phoebe? Stay tuned to the CBS soap and don’t forget to check CDL often for the latest Bold and the Beautiful spoilers, updates, and news.