BY hellodrdavis on July 29, 2019 | Comments: one comment
Related : Soap Opera, Spoiler, Television, The Bold and the Beautiful 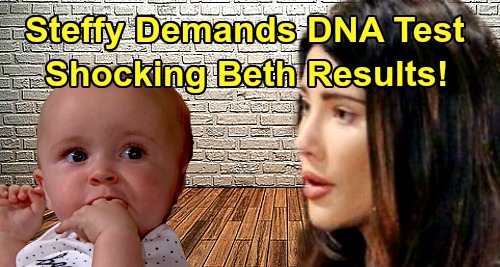 The Bold and the Beautiful spoilers tease that the big reveal over Phoebe Forrester/Beth Spencer (River Davidson and Madeline Valdez) will be huge, but it won’t resolve all the tension over the situation by any means. In many ways, once Hope Logan (Annika Noelle), Liam Spencer (Scott Clifton), and Steffy Forrester (Jacqueline MacInnes Wood) get the news that Phoebe is really Beth, it will only be the beginning of a whirlwind of changes for the three adults.

Of course, Hope is going to be overjoyed with the revelation that her daughter is alive. She’ll probably want to take Beth immediately into her possession and get on with life. She’ll have months of lost time to make up for, and she won’t want to miss a minute of time with her precious daughter.

But for Steffy, she’ll be facing serious devastation. Keep in mind that she fully bonded with “Phoebe” and loved her just as if she gave birth to her herself. She’ll go from being a mother of two to instantly losing a daughter, and she may want to just slow the whole process down.

It seems that at some point in this ordeal, once the dust settles and emotions have died down a bit, Steffy may want to make sure about what everyone is assuming about Beth’s existence. After all, the story of how Beth came to be stolen by Reese Buckingham (Wayne Brady) and then adopted by Steffy is pretty unbelievable, and Steffy may be wondering if Phoebe is indeed Beth.

And that’s where Dr. Jordan Armstrong – who will soon be on canvas and portrayed by soap vet Vincent Irizarry – may come in. As B&B viewers probably know by now, Dr. Armstrong will be heavily involved in the Phoebe/Beth storyline, and since he won’t be appearing on canvas until well after the Beth reveal, that means that the baby storyline will be continuing. But how?

Well, one possibility is that Dr. Armstrong shows up on the scene as the doctor who does genetic testing on Beth, to verify that she is indeed Liam and Hope’s daughter. That would seem simple enough, but it doesn’t seem like TPTB would bring a vet like Vincent Irizarry in for that simple of a storyline.

The Bold and the Beautiful spoilers tease that there will likely be more to the story than anyone envisions at the moment, and we need to keep in mind at TPTB have promised a major twist in the storyline down the road.

Could Dr. Armstrong end up being a doctor who ends up dealing with a medical issue involving Beth? It’s possible that a simple round of genetic tests could reveal a problem with Beth’s health, which could explain the ongoing need for a new doctor on the B&B scene.

At any rate, it will be interesting to see what necessitates Dr. Armstrong to play a major role in the Phoebe/Beth storyline going forward. One thing’s for sure – more exciting drama is on the way! What do you think Dr. Armstrong’s role will be in this saga – are you expecting Steffy to challenge for custody? Stay tuned to the CBS soap and don’t forget to check CDL often for the latest Bold and the Beautiful spoilers, updates, and news.