The Bold and the Beautiful Spoilers: Beth Reveal Traps Liam Between Lope and Steam – Steffy and Hope Clash Over Blended Family 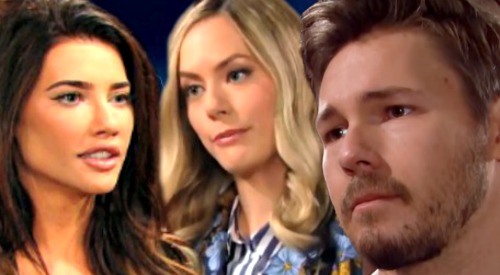 The Bold and the Beautiful spoilers tease that Liam Spencer (Scott Clifton) will soon play an important role in two women’s lives, yet while he’ll bring one unprecedented joy, he’ll rip the other’s life apart. As B&B viewers know, Liam is completely unnerved by Hope Logan’s (Annika Noelle) marriage to Thomas Forrester (Matthew Atkinson), and he’s determined to prove that Thomas has been manipulating Hope.

So, according to The Bold and the Beautiful spoilers, Liam will embark on an investigation into Thomas. Specifically, Liam will overhear Thomas and Florence “Flo” Fulton (Katrina Bowden) arguing after the wedding and he’ll learn that the two have a big secret that Thomas doesn’t ever want Hope to find out. That will propel Liam on a big search to discover the secret.

Well, as B&B viewers know, the secret is that Liam and Hope’s daughter Beth Spencer is alive and was unknowingly adopted by Steffy Forrester (Jacqueline MacInnes Wood). And as Liam starts to investigate Flo’s background, he’ll come to question the circumstances surrounding Phoebe Forrester’s (River Davidson and Madeline Valdez) adoption.

Liam won’t know what he’s wading into, but he’ll know that he has to get to the bottom of what’s going on. He’ll delicately question Steffy about the adoption and how it all came about, but of course there are some critical things that Steffy doesn’t know – such as the involvement of Reese Buckingham (Wayne Brady) in the whole thing – and that will probably alarm him.

At any rate, it’s certainly looking like Liam may be the one to finally discover that Beth is alive and in Steffy’s care. And when and if that happens, he’s going to bring great joy to his ex, Hope. But he’ll absolutely destroy a big part of Steffy’s life. After all, Steffy will wind up losing her adopted daughter, whom she loves just as if she had given birth to her.

And this will seemingly set up the path to a reunion for Lope. After all, if Liam is the one who ultimately puts Beth into Hope’s arms and reunites their little family, it’s hard to imagine them not getting back together. Sure, Thomas will be in the way at first, and Hope’s marriage to him will have to be dealt with. But the way things are going now, it sure looks like Lope will live again.

Look for a serious period of rebuilding, as Liam, Hope, and Steffy try to once again negotiate their blended family. While Hope was pregnant with Beth, these three had a very difficult time agreeing on how they were going to raise their children together, and they’ll probably experience some of the same issues again.

But this time, there will be the added wrinkle of Beth formerly being Phoebe. Steffy will have to give up her role as mother to the child and simply become another adult in her life. Look for some challenges as Hope, Liam and Steffy try to build a life for their kids with all these complications.

Do you think that Lope will get back together once Beth is discovered to be alive? Stay tuned to the CBS soap and don’t forget to check CDL often for the latest Bold and the Beautiful spoilers, updates, and news.