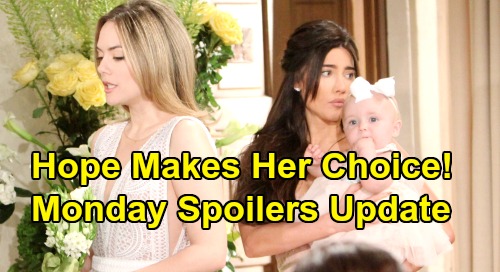 The Bold and the Beautiful spoilers update for Monday, July 22, tease that the wedding of Thomas Forrester (Matthew Atkinson) and Hope Logan (Annika Noelle) will continue after a brief hiccup. Hope’s caught in a moment of confusion, since Phoebe Forrester (River Davidson and Madeline Valdez) just crawled up to her and babbled “mama” as she was supposed to agree to her vows.

Well, the wedding will continue, and Hope and Thomas will indeed become husband and wife, then the reception will begin, but it won’t be without its own drama. According to B&B spoilers, Hope and Liam Spencer (Scott Clifton) will spend a moment alone together upstairs after the ceremony. Perhaps Hope will just need a moment to herself, and Liam will slip upstairs to have a word.

It will be interesting to see what those two have to discuss, and it seems that while they’re talking, more drama will be unfolding downstairs. Florence “Flo” Fulton (Katrina Bowden) will show up at the reception, most likely still inebriated since she was downing vodka pretty heavily on Friday’s episode. There, she’ll get into it with Thomas, and they’ll argue about the huge secret they’re keeping.

Thomas will once again take the opportunity to threaten Flo, angrily telling her that she’ll take the secret about Beth Spencer to her grave. Flo will take that as a threat, and rightly so, but she’s not the only one who will be alarmed by Thomas’ words. Liam will come downstairs from seeing Hope and overhear a portion of Thomas and Flo’s argument.

Liam won’t hear everything that transpires between Thomas and Flo, but he’ll hear something about a secret, and he’ll learn that it involves Flo and Hope. He’ll also hear Thomas’ threatening tone, and he’ll decide that he needs to investigate exactly what’s going on.

The Bold and the Beautiful spoilers indicate that from there, Liam will contact his brother Wyatt Spencer (Darin Brooks) and fill him in on the fact that Thomas has a big secret and that it somehow involves Flo. Since Liam doesn’t really know Flo personally and just knows her as Phoebe’s birth mother, he’ll carefully quiz Wyatt about Flo’s background and history.

We can also expect to see Liam get details about Phoebe’s adoption from Steffy Forrester (Jacqueline MacInnes Wood) in the coming week. Liam’s on the right track, but he’ll have a long way to go. But for now, he’ll be feeling determined to get to the bottom of the big secret and expose Thomas – but little does he know that it all right end up with the discovery that his daughter is alive!