The Bold and the Beautiful Spoilers: Thomas Makes Douglas Ask Hope To Share Dad’s Bed – Puts Too Much Pressure On Young Son

BY hellodrdavis on July 20, 2019 | Comments: 3 comments
Related : Soap Opera, Spoiler, Television, The Bold and the Beautiful 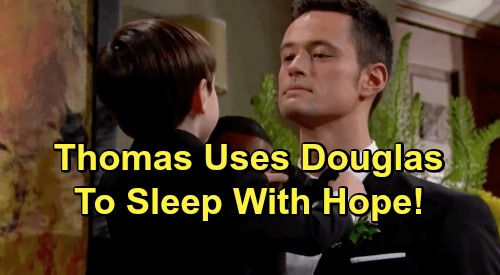 The Bold and the Beautiful spoilers tease that Thomas Forrester (Matthew Atkinson) will be up to more of his devious plans. It took a lot of deception and maneuvering for him to get Hope Logan (Annika Noelle) to become his wife, but he accomplished his goal. He and Hope will indeed tie the knot, and he’ll be closer to getting what he wants.

But Thomas wants more than a marriage certificate. He wants a union with Hope in every way possible, and that means physical intimacy. Of course, for Hope, the thought of being intimate with Thomas is horrifying and is something she’s just not ready for. She basically agreed to marry Thomas for Douglas Forrester’s (Henry Joseph Samiri) sake, and she’s been clear with Thomas that she’s just not ready to make love.

But of course this is Thomas we’re talking about, so he’s not likely to take no for an answer. He’ll want to make his marriage to Hope “real,” but he’ll quickly realize that the more pressure he puts on her, the longer it will probably be before she’s ready for intimacy. So, he’ll do exactly what he’s done before…use Douglas to pull Hope close.

In a creepy and unsettling turn of events, B&B spoilers indicate that Thomas will have a talk with his son. He’ll delicately broach the subject of everyone’s sleeping arrangements, and he’ll pressure Douglas to tell Hope that “mommies and daddies sleep in the same bed.”

According to B&B spoilers, Douglas will start to feel pressured by all of his dad’s requests for him to cajole Hope into various things, and we can’t help but wonder about the effect that all of this is going to have on Douglas in the end. He’s a sweet kid and means well, but all of this pressure to do his dad’s bidding may start to feel weird to him, even at his young age.

We’ll see if Douglas follows through and convinces Hope to sleep in the same bed as Thomas, but even if he does, it doesn’t seem like Hope is going to be too thrilled about the arrangement. And it certainly doesn’t look like she’s going to consent to any physical intimacy with Thomas anytime soon.

One can only hope that the big reveal about Beth Spencer is coming very soon, so that Hope is out of this difficult – and quite possibly dangerous – living arrangement with Thomas. Do you think that Thomas will continue to pressure his son to do his bidding? Stay tuned to the CBS soap and don’t forget to check CDL often for the latest Bold and the Beautiful spoilers, updates, and news.