BY Heather Hughes on September 14, 2019 | Comments: one comment
Related : Soap Opera, Spoiler, Television, The Bold and the Beautiful 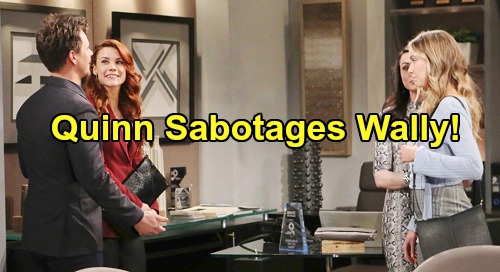 The Bold and the Beautiful (B&B) spoilers tease that Shauna Fulton (Denise Richards) will try to get her friendship with Quinn Forrester (Rena Sofer) back on track. Quinn has a soft spot for her old pal, so she may be receptive to the idea. She can’t forget about Shauna and Florence “Flo” Fulton’s (Katrina Bowden) deception, but she can forgive – especially if Shauna presents a good reason to bond again.

Shauna will attempt to do just that when she approaches Quinn. During the week of September 16-20, Shauna will apologize once more and hope Quinn can do her a favor. This favor will affect Wyatt Spencer (Darin Brooks) as well as Flo, so Quinn will hear Shauna out.

Shauna will remind Quinn that Flo’s deeply remorseful for her role in the baby swap plot. She’ll maintain that Flo wanted to come clean so many times, but she was terrified – both of Thomas Forrester (Matthew Atkinson) and of losing Wyatt. There’s really no excuse for what Flo did, but Shauna will stick to her story that her daughter was a victim, too. She won’t think Flo should have to keep suffering.

Of course, Flo already scored an immunity deal, so that was a lucky enough break. However, Shauna will know Flo isn’t happy and won’t be fulfilled without love. Flo lost Wyatt, but Shauna will think they can make this right. More specifically, she’ll think Quinn can make this right! The Bold and the Beautiful spoilers say Shauna will push Quinn to do what she does best and meddle in her son’s love life.

That’s definitely something Quinn’s great at, but she’ll have some reservations. Quinn only wants the best for her son. How can she be certain Flo won’t hurt Wyatt again? Shauna may assure Quinn that Flo’s turned form her lying ways and just wants a fresh start. She’ll do everything she can to make Quinn believe Flo’s still the right woman for Wyatt.

Quinn Forrester Will Have A Tough Decision To Make

B&B fans know Quinn was always Flo’s biggest cheerleader – at least until all this baby switch drama blew up. The Bold and the Beautiful spoilers say Shauna will urge Quinn to push Wyatt and Flo together. She’ll want Quinn to drive Sally Spectra (Courtney Hope) out of the picture, and Quinn may find that idea appealing.

It sounds like Quinn will have a tough decision to make. Will she agree to sabotage Sally and Wyatt’s romance? Will Quinn put aside her concerns and try to score Flo a reunion with Wyatt?