The Bold and the Beautiful Spoilers: Friday, September 13 Update – Shauna Gets Ridge in Bed with Her – Flo Faces Sally’s Wrath 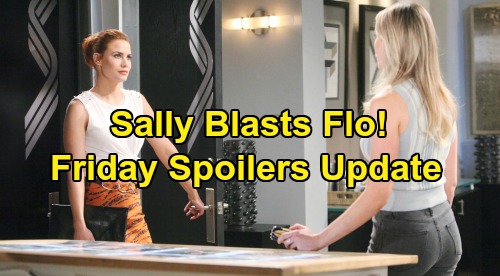 The Bold and the Beautiful (B&B) spoilers for Friday, September 13, tease that Sally Spectra (Courtney Hope) will do some eavesdropping. She’ll listen in on Florence “Flo” Fulton’s (Katrina Bowden) conversation, which will lead to an infuriating discovery. It looks like Flo will be plotting her reunion with Wyatt Spencer (Darin Brooks), so that certainly won’t go over well with Sally.

B&B fans can watch Sally unleash her wrath on her rival. She’ll make it clear that Flo has no business going after Wyatt again. Sally won’t want Flo anywhere near any of the people she’s wronged, so she might urge her to get out of town. Of course, Flo has no intention of leaving. She knows she doesn’t deserve another chance with Wyatt, but that won’t stop her from going after one.

While Sally blasts Flo for her mistakes and pushes her to back off, Ridge Forrester’s (Thorsten Kaye) evening will get a whole lot worse. Things are already pretty terrible since Ridge just had a fight with Brooke Forrester (Katherine Kelly Lang) and ultimately walked out on her. Ridge has been drowning his sorrows at Bikini Bar, which will put him in a startling predicament as the night wears on.

Shauna Fulton (Denise Richards) just showed up, so this is a recipe for disaster. The Bold and the Beautiful spoilers say Shauna will remain grateful for Ridge’s mercy. He didn’t hinder Flo’s immunity deal because of Thomas Forrester (Matthew Atkinson), but Shauna’s still thankful that her daughter’s free.

Shauna can also understand Ridge’s need to protect his child; that’s exactly how she feels when it comes to Flo. It’s something they can connect over – at least as much as Ridge is capable connecting right now. The truth is Ridge is plastered and may not be able to carry on a coherent conversation for long.

Later, B&B spoilers say Shauna will take Ridge somewhere to sleep it off. She’ll get assistance from bartender Danny (Keith Carlos) as she gets Ridge into bed. Unfortunately, Shauna’s “help” will do more harm than good. That’s because Ridge is set to wake up in bed with Shauna by the time Monday rolls around! Since Shauna recently faced Brooke’s unrelenting fury, this may be a little dose of vengeance.