The Bold and the Beautiful Spoilers: Liam and Hope’s Marriage Crumbles – Thomas’ Sabotage Out of Control, Delivers Worst Blow Yet

BY Heather Hughes on May 13, 2019 | Comments: one comment
Related : Soap Opera, Spoiler, Television, The Bold and the Beautiful 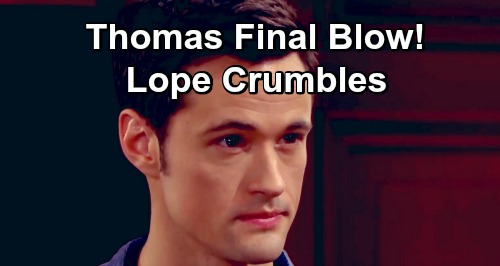 The Bold and the Beautiful (B&B) spoilers tease that Thomas Forrester (Matthew Atkinson) won’t let Liam Spencer (Scott Clifton) get in his way. Liam and Hope Spencer’s (Annika Noelle) marriage vows mean absolutely nothing to Thomas. He’s only concerned with what he wants and what he believes is the best outcome for Hope.

Thomas clearly believes he’s the better man, so he’s fine with ripping “Lope” apart. He feels like Hope’s meant to be with him instead, which is why he’ll do whatever it takes to make that happen.

Thomas wants a new mom for Douglas Forrester (Henry Joseph Samiri) as well, but this is mostly about his own happiness. He’ll go to great lengths to get the romance he wants in the coming weeks.

During the week of May 20-24, Thomas’ plan will really heat up. Despite Liam’s attempts to protect his relationship, he may be no match for Thomas’ determined attitude. The Bold and the Beautiful spoilers say Thomas will resort to more manipulation.

If he can’t win Hope’s heart fair and square, Thomas is more than willing to play dirty. B&B fans know results are all Thomas cares about here.

Unfortunately, Liam and Hope’s marriage was in a fragile place to begin with. The loss of Beth Spencer was a crushing blow, so it’s been a struggle to come back from that. Liam is also feeling the pull of Steffy Forrester (Jacqueline MacInnes Wood) and the girls in Paris.

“Lope” has enough obstacles without Thomas making matters worse, which is why his latest round of sabotage will be devastating. The Bold and the Beautiful spoilers say Thomas’ trick will set Liam and Hope up for disaster. He’ll use some sneaky strategy to create tension and drive them apart.

By the time Thomas is through, Hope and Liam’s marriage may be hanging by a thread. Thomas will do everything in his power to severe what’s left of their bond and finally put the nail in “Lope’s” coffin.

Will Thomas succeed in destroying Liam and Hope’s relationship? Will they end their marriage once his sabotage goes too far? We’ll give you updates as other B&B news comes in. Stay tuned to the CBS soap and don’t forget to check CDL often for the latest Bold and the Beautiful spoilers, updates, and news.