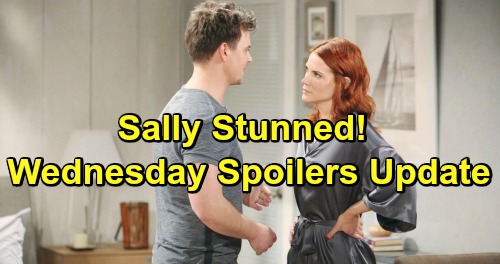 The Bold and the Beautiful (B&B) spoilers for Wednesday, February 20, tease that Justin Barber (Aaron D. Spears) will have a sneaky plan. He won’t be able to achieve results on his own, so he’ll summon Donna Logan (Jennifer Gareis) to make a pitch. Justin will feel confident that Donna is just the person to help him pull this off.

Donna will naturally wonder what’s up when Justin calls her over for a meeting. Justin will insist this has to be kept quiet, so the secrecy will make it even more intriguing. By the time Donna arrives, she’ll be eager to hear what Justin has in store.

Donna will be surprised when Justin reveals he wants to reunite Bill Spencer (Don Diamont) and Katie Logan (Heather Tom). Since Bill could easily revert to his old wicked ways, Donna may wonder if this is really the best idea. She’ll hope to watch out for Katie and her fragile heart, which has been broken far too many times.

However, Justin will likely praise all the changes he’s seen in Bill. He may argue that Bill’s matured and can be the family man Katie needs him to be. Bill’s already been stepping up with Will Spencer (Finnegan George), so Justin will think Bill can step up for Katie, too. Bill and Katie just need a little nudge in the right direction, which is where matchmaking Justin and Donna will come in!

While those B&B exes plot a “Batie” reunion, Wyatt Spencer (Darin Brooks) will have good news and bad news for Sally Spectra (Courtney Hope). He’ll start with the disappointing side of things, so Sally will learn Wyatt may be headed back to Spencer Publications. She won’t be thrilled about Wyatt being in Bill’s orbit more often, but she’ll respect the bond they share and offer support.

Fortunately, Sally won’t focus on her doubts for too long. The Bold and the Beautiful spoilers say Wyatt will make a stunning admission. He’ll plan to make reviving Spectra Fashions part of the deal, so Sally will be amazed by his generosity. She certainly won’t be opposed to Wyatt making her dreams a reality again.

The Bold and the Beautiful spoilers say Bill may put up a fight later this week, but Wyatt will ultimately get his wish. It won’t be long until Sally and Wyatt are celebrating Spectra’s bright future. We’ll give you updates as other B&B details emerge. Stay tuned to the CBS soap and don’t forget to check CDL often for the latest Bold and the Beautiful spoilers, updates, and news.