The Bold and the Beautiful Spoilers: Thomas Returns To Take Hope Away From Liam – Plots To Kill Romantic Rival?

BY hellodrdavis on August 8, 2019 | Comments: one comment
Related : Soap Opera, Spoiler, Television, The Bold and the Beautiful 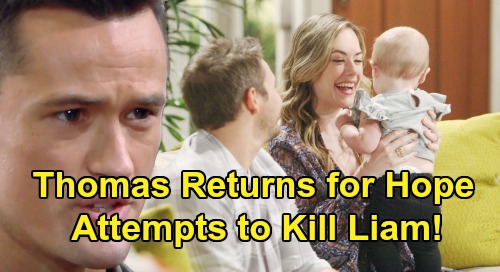 The Bold and the Beautiful spoilers tease that Thomas Forrester (Matthew Atkinson) is going to be feeling desperate. As B&B viewers know, he had a major failure in his plan to get Hope Logan (Annika Noelle) all to himself when his own son Douglas Forrester (Henry Joseph Samiri) leaned the truth about Beth Spencer (River Davidson and Madeline Valdez) being alive. That started a cascade of events that ultimately led to Liam Spencer (Scott Clifton) and Hope learning the truth.

Well, now it seems that Thomas is going to regroup and consider his options. Viewers haven’t seen Thomas since the big confrontation with Liam at Forrester Creations, when Hope finally learned that Beth was alive. Thomas fled the scene and hasn’t been seen or heard from since.

Of course, Thomas surely knows at this point that he’s in serious trouble with his family, not to mention legal trouble over obstructing justice and over his involvement in Emma Barber’s (Nia Sioux) death. According to B&B spoilers, Thomas will remain in hiding for a while, while he considers his options and tries to figure out what to do next.

Thanks to The Bold and the Beautiful spoilers, we know a couple things about what Thomas will be doing and thinking while he’s in hiding. First off, his pal Vincent Walker (Joe LoCicero) will be back on canvas starting on Wednesday, August 14. That can only mean one thing – that Thomas will reach out to Vincent for help with his current predicament. That can only mean trouble.

Second, B&B spoilers indicate that Thomas will be cooking up a new plan to get Hope away from Liam. It seems that Thomas isn’t going to just give up on his marriage to Hope – even though it was based on lies and manipulation – and that he’s going to try to figure out a way to get her back. He’ll be convinced that things aren’t over, and that he can actually return and win Hope back.

The Bold and the Beautiful spoilers also say that a delusional Thomas will come to a dangerous realization – that there’s only one way to get Hope away from Liam. But what “one way” are we talking about here? Could Thomas be thinking about abducting Hope at this point? That would certainly force Hope to interact with him, and maybe Thomas is thinking that if he takes Hope, he can then force her to listen to his side of the story.

That’s one option, but there is a darker possibility. Could Thomas be considering getting rid of Liam – i.e., getting rid of the competition for Hope? It wouldn’t be too much of a stretch to think that Thomas might have homicidal thoughts at this point. After all, he was involved in Emma’s death, and it seems that he would have done virtually anything to stop her. Might he go after Liam now?

It’s a terrible thought, but we wouldn’t put anything past Thomas at this point. He was seriously devolving when we saw him last, and now he will probably feel desperate, so who knows what he’ll do. Do you think there’s a chance he’ll try to kill Liam in order to get Hope for himself? Stay tuned to the CBS soap and don’t forget to check CDL often for the latest Bold and the Beautiful spoilers, updates, and news.