BY Heather Hughes on August 8, 2019 | Comments: one comment
Related : Soap Opera, Spoiler, Television, The Bold and the Beautiful 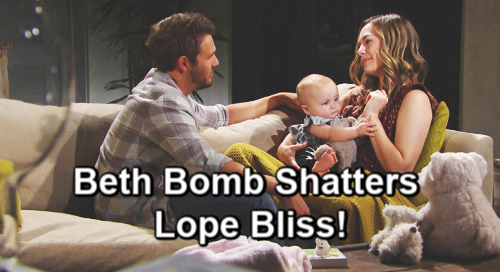 The Bold and the Beautiful (B&B) spoilers tease that Liam Spencer (Scott Clifton) and Hope Forrester (Annika Noelle) will believe in happy endings. Hope will undoubtedly get an annulment underway soon enough. She’ll be ready to put Thomas Forrester (Matthew Atkinson) behind her along with the pain of the last few months. Hope will just want to start a bright new chapter with Liam.

B&B fans can expect Liam and Hope to get their family back on track, but their relationship will remain up in the air briefly. Due to Liam’s feelings for Steffy Forrester (Jacqueline MacInnes Wood), Hope may be unsure of where they stand. However, Hope will make her desires crystal clear to Liam during the week of August 12-16. She’ll once again declare her love for Liam and push for a reunion.

Hope’s passionate speech will affect Liam deeply, and it looks like he’ll be on the same page. He slept with Steffy, but Thomas’ drugs are what set that incident in motion.

Liam is still very much in love with Hope, so he’ll likely let her know and insist he wants a romantic reunion, too. Hope and Liam will finally have their blissful little bubble with Beth Spencer (Madeline Valdez and River Davidson), but bubbles burst eventually!

At first, everything will seem like it’s going to work out wonderfully for “Lope.” The Bold and the Beautiful spoilers say they’ll be on cloud nine, but something will knock them right off down the road. There’ll be some rage that erupts from the reunited lovebirds, so what will be the source of this anger?

It’s possible Steffy will be so distraught without “Phoebe Forrester” aka Beth (River Davidson and Madeline Valdez) that she decides to fight. We know she’ll give Beth up initially, but that doesn’t mean she won’t spark some legal battle later. Then again, Thomas could be the source of “Lope’s” anger issues. We know he’ll come back in the picture with a dark plot to win Hope over.

Dr. Jordan Armstrong Will Be On Hand To Care For Beth Spencer

If that plot puts Beth in danger in some way, Liam and Hope would certainly fly into a rage. It could set up Dr. Jordan Armstrong’s (Vincent Irizarry) debut later this month as well. The Bold and the Beautiful spoilers suggest the doc will be on hand to care for ailing Beth, so panic and fury are to be expected from her parents.

Bottom line, the road ahead won’t be easy for “Lope.” Happiness is hitting hard right now, but The Bold and the Beautiful spoilers say big problems are on the way. Could Beth obstacles bring relationship drama? Will “Lope’s” reunion crumble just as fast?

It sounds like some interesting developments are brewing. We’ll give you updates as other B&B news comes in. Stay tuned to the CBS soap and don’t forget to check CDL often for the latest Bold and the Beautiful spoilers, updates and news.