The Bold and the Beautiful Spoilers: Katrina Bowden On Break From B&B – Flo Fulton Will Be Back

BY hellodrdavis on October 21, 2019 | Comments: 2 comments
Related : Soap Opera, Spoiler, Television, The Bold and the Beautiful 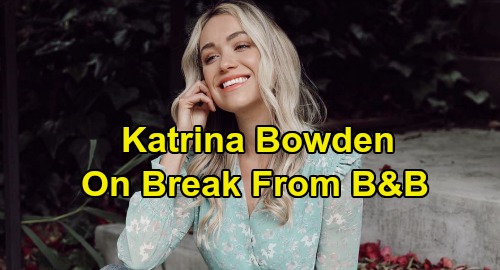 The Bold and the Beautiful spoilers has some news to pass on about the status of a popular B&B star. Katrina Bowden, who portrays Florence “Flo” Fulton on the CBS soap, will be taking some time off from the show. Katrina recently shared on her Instagram feed that she’ll be in Australia filming a movie for the next 6 1/2 weeks.

Katrina shared the following message with her Instagram followers: “At LAX right now getting a little buzzed off tequila as I wait for my delayed flight to somewhere very far away. I’m going to shoot a movie for the next 6.5 weeks and I’m so excited and anxious and can’t wait to share more ahhh!!”

Katrina’s soap star friends and colleagues have been responded to her post. Kelly Kruger (Mackenzie Browning, Y&R) commented: “Soooo excited for you.” And Rena Sofer (Quinn Forrester, B&B) piped in with: “Omg!!! Where what?? I’ll miss you!” To that Katrina replied that she was headed to Australia to shoot her movie.

But what does this all mean for the future of Flo on B&B? Some of Katrina’s Instagram followers wondered if her departure from the soap for 6 1/2 weeks meant that she was leaving the show, but Katrina reassured them that she was just leaving for a few weeks and would be right back to resume filming at B&B.

That’s great news for Katrina’s fans, and for fans of Flo’s pairing with Wyatt Spencer (Darin Brooks). But one does wonder what’s in store for Flo and Wyatt now that Katrina won’t be around for a while to tape. This could mean that the character of Flo will be off doing her own thing and recuperating from kidney surgery while Wyatt and Sally Spectra (Courtney Hope) continue to bond and plan their wedding.

Of course, Katrina could also have taped scenes in advance before she left, and/or perhaps the Sally/Wyatt/Flo triangle just won’t be a front-burner storyline for a few weeks. There are certainly other pressing matters that B&B could focus on during Katrina’s absence, such as the ongoing custody drama over Douglas Forrester (Henry Joseph Samiri) and the triangle between Brooke Forrester (Katherine Kelly Lang), Ridge Forrester (Thorsten Kaye) and Shauna Fulton (Denise Richards).

At any rate, it’s great news that Katrina has a new project, and that she’s sticking with B&B. So far, no word on the title and subject matter of the movie, but we’ll keep you posted as we learn more. Congratulations to Katrina on the project! Stay tuned to the CBS soap and don’t forget to check CDL often for the latest Bold and the Beautiful spoilers, updates, and news.

At LAX right now getting a little buzzed off tequila 🤪 as a wait for my delayed flight to somewhere very far away. I’m going to shoot a movie for the next 6.5 weeks and I’m so excited and anxious and can’t wait to share more ahhh!! 🦈🐨🇦🇺