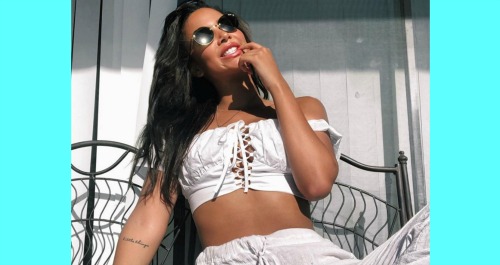 The Bold and the Beautiful (B&B) spoilers tease that viewers will soon see a new face on the CBS soap, but she might be familiar to some reality TV fans. According to People, Kyra Green has joined the cast as a Forrester Creations model. Green was featured on the first season of the American version of Love Island, so you should remember her if that’s one of your guilty pleasures.

Since Green’s character will be stepping into model mode, she’ll share scenes with Ridge Forrester (Thorsten Kaye) and Brooke Forrester (Katherine Kelly Lang). You can catch Green’s episodes on September 20 as well as September 23. It turns out Green had a little anxiety about her debut, but everyone at B&B made her feel right at home.

“Everyone, including the crew and actors, were beyond sweet to me,” Green said. “I was so nervous since it was my first acting job since my Kidz Bop days when I was like 10.” Green called the whole experience “rad” and indicated that she was really excited to get back into the acting game.

Green also revealed that her parents are huge Bold and the Beautiful fans, so scoring the part must’ve meant a lot to her. She comes from a very fashionable family, which undoubtedly helped ease those nerves of hers. We’re sure Green will do a great job as her character helps prepare for an upcoming FC fashion show.

Of course, things may be a little tense around the office for a while. Ridge made the decision not to fight Florence “Flo” Fulton’s (Katrina Bowden) immunity deal, so Brooke will battle plenty of anger over that. Thomas Forrester (Matthew Atkinson) also deserves punishment in Brooke’s eyes, so watching him get off scot-free is going to be tough.

On top of all that, The Bold and the Beautiful spoilers say Ridge will find himself with a secret. After he gets drunk, Ridge will wake up in bed with Shauna Fulton (Denise Richards). On the bright side, that could make Ridge soften toward Brooke out of guilt.

Brooke and Ridge may also bond again after Katie Logan’s (Heather Tom) upcoming medical crisis. A health scare always brings people together out of fear. There’ll be reasons for that office tension to lift, but things are sure to blow up down the road.

SO EXCITED TO ANNOUNCE my full exclusive interview with @people in my guest starring role on @boldandbeautifulcbs episodes 9/20 & 9/23 🥰 thank you so much @cbstv and the whole team !! Swipe up the link in my story to read the full interview, where I also spill some tea on me and @cashelb 🙈