The Bold and the Beautiful Spoilers: Newly Freed Flo Makes Beeline For Wyatt – Begs For Forgiveness & Another Chance

BY hellodrdavis on September 10, 2019 | Comments: 2 comments
Related : Soap Opera, Spoiler, Television, The Bold and the Beautiful 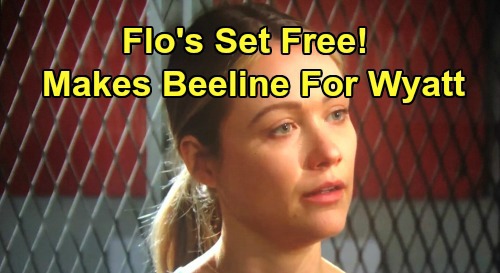 The Bold and the Beautiful spoilers tease that Flo Fulton (Katrina Bowden) will soon get a big break. As B&B viewers know, Ridge Forrester (Thorsten Kaye) has made a deal with Detective Alex Sanchez (Jeremy Ray Valdez) to protect his son Thomas Forrester (Matthew Atkinson) from further scrutiny. Unfortunately for Ridge, the deal means that Flo will go free and all charges against her will be dropped. But that’s great news for Flo, and she’ll feel like she’s got a new lease on life.

According to B&B spoilers, Flo will soon regroup and get her life back together. Of course, any hope for a bright future at Forrester Creations or a relationship with the Forresters and the Logans is shot at this point. She won’t be getting her career or her standing within the Logan family back any time soon, but at least she’ll be free from a legal standpoint and she’ll be ready to go on with life.

In fact, Flo might be feeling a bit overly optimistic about her future, as she starts thinking about all that she lost with Wyatt Spencer (Darin Brooks). According to B&B spoilers, Flo will start to wonder whether all hope is really lost with Wyatt. As B&B viewers will remember, Wyatt summarily dumped Flo after she finally was forced to tell the truth about her role in Reese Buckingham’s (Wayne Brady) kidnapping and adoption scam. Wyatt just couldn’t take it that Flo schemed to keep Beth Spencer (River Davidson and Madeline Valdez) from her parents.

But Flo will start wondering whether there’s perhaps a chance that Wyatt will take her back. She’ll apparently wonder aloud, or perhaps to her mom Shauna Fulton (Denise Richards), whether she might still have a future with Wyatt. Unfortunately for her, Sally Spectra (Courtney Hope) will overhear her plans and totally call her out on her deception and her con against Wyatt and the Forrester and Logan families. It should be quite the scene as Sally lets Flo have it.

But it seems that even Sally’s wrath won’t deter Flo from trying to salvage her relationship with Wyatt. According to B&B spoilers, Flo will decide that it’s at least worth a try to make a big appeal to Wyatt in person, and she’ll make a beeline for Wyatt to beg for forgiveness and seek another chance at happiness with him. Of course, for Wyatt this attempt on Flo’s part will probably seem pretty desperate and futile.

After all, Wyatt has decided to move right on ahead with a relationship with Sally. He feels terrible for how he treated Sally and how he got together with Flo after Sally made an honest mistake. It’s seriously doubtful that Wyatt would even entertain the idea of getting back together with Flo now, and not only because of Sally. Wyatt is seriously disgusted with Flo and what she did to Hope Logan (Annika Noelle) and Liam Spencer (Scott Clifton).

But it will be interesting to watch Flo grovel at Wyatt’s feet. It’s hard to imagine what she could say at this point that would even give him pause. But even though Wyatt doesn’t like secrets and lies, he does tend to be a big softie, so you never know…Flo might get under his skin a bit and make him think a bit.

Do you think that Wyatt would ever consider forgiving Flo after what she’s done? Stay tuned to the CBS soap and don’t forget to check CDL often for the latest Bold and the Beautiful spoilers, updates, and news.