The Bold and the Beautiful Spoilers: Steffy, Hope & Liam Unite Against Thomas – Keep Douglas Away from Selfish Father

BY hellodrdavis on September 10, 2019 | Comments: one comment
Related : Soap Opera, Spoiler, Television, The Bold and the Beautiful 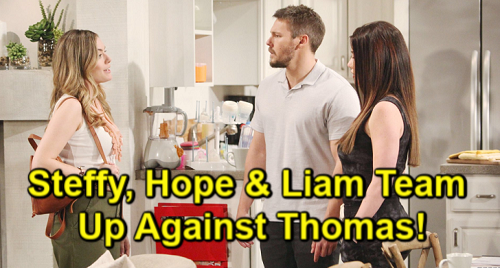 The Bold and the Beautiful (B&B) spoilers tease that Steffy Forrester (Jacqueline MacInnes Wood), Hope Logan (Annika Noelle) and Liam Spencer (Scott Clifton) could all have a good reason to come together.

Thomas Forrester (Matthew Atkinson) recently got chewed out by Steffy, who was appalled for many reasons – including the fact that Thomas manipulated his young son and used him as bait.

Douglas Forrester (Henry Joseph Samiri) will play a crucial role in the chaos this fall. Thomas is the only biological parent Douglas has left, but Hope and Liam won’t want Thomas raising the boy. They’ll still consider Thomas dangerous and incapable of giving Douglas the kind of love he deserves. Thomas already proved he tends to put his own needs above his son’s.

Thomas Forrester May Head Down A Dark Path Once Again

Although Thomas had a moment of clarity and remorse with Douglas, who’s to say he won’t head down a dark road again? Poor Douglas was afraid of being physically abused at one point.

B&B fans watched as Douglas cried out for his raging father to stop and put his hands up to protect himself. That’s not the kind of home Douglas needs to be in, and there’s no guarantee Thomas won’t revert to that behavior.

Perhaps Thomas could prove himself in time, but he’s one big risk at the moment. The Bold and the Beautiful spoilers say Brooke Forrester (Katherine Kelly Lang) will be on “Lope’s” side – and Steffy may be as well. After the way she lashed out at Thomas, it’s easy to imagine Steffy supporting Liam and Hope in the custody battle. That’s especially true since Thomas will hurt Steffy once again.

Facing Another Betrayal May Make Steffy Forrester Take Lope’s Side

The Bold and the Beautiful spoilers say Thomas will make some power plays at Forrester Creations. As Steffy tries to distract herself from her pain with work, Thomas will attempt to hijack her career goals and make them his own. Steffy’s suffered enough thanks to Thomas, but he’ll show he always looks out for number one in the end.

Facing another betrayal could make Steffy even more determined to back Liam and Hope up. She may feel like Thomas is never really going to turn from his selfish ways and put his family first.

It sounds like some exciting drama’s ahead. We’ll give you updates as other B&B news comes in. Stay tuned to the CBS soap and don’t forget to check CDL often for the latest Bold and the Beautiful spoilers, updates and news.