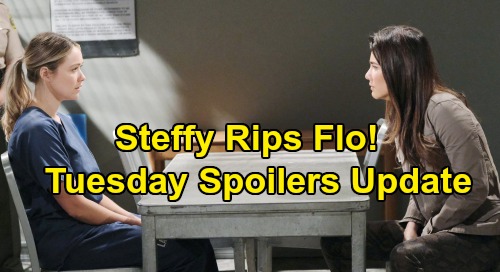 Flo’s prosecution would inevitably stir up more interest in the Emma Barber (Nia Sioux) case and put Thomas in a tight spot. If Ridge chooses to let this immunity deal happen, Thomas can move on with his life. He’ll still face backlash from the people he’s wronged, but that’s better than legal issues or a public nightmare. Ridge will hate the thought of letting Flo off the hook for her crimes, but he has to think about what’s best for Thomas.

Protecting his son is Ridge’s main goal, so he’ll keep that in mind as he mulls over his options. Shauna Fulton (Denise Richards) will continue to fight for her daughter; she’ll rev up the pressure on Ridge and hope he cuts Flo a break. However, Flo probably won’t be a real factor in Ridge’s decision. This is all about Thomas and giving him a chance to overcome his mistakes.

In the end, Ridge will think giving Flo her freedom is the right call. It’ll ensure Thomas can move forward, so that’ll make it worth it to Ridge. Brooke Forrester (Katherine Kelly Lang) won’t agree when she hears this shocking news. She’ll be brought up to speed on Flo’s deal and Ridge’s role in it later this week. The Bold and the Beautiful spoilers say “Bridge’s” conflict will be worse than ever.

In the meantime, Brooke will make her stance on Thomas crystal clear. She’ll reiterate that Thomas deserves to pay and maintain that he’s a master manipulator. As for Steffy Forrester (Jacqueline MacInnes Wood), she’ll visit Flo so she can let her have it! Steffy already berated Thomas, but now it’s Flo’s turn to face the pain in Steffy’s eyes and hear her explosive outburst.

Steffy will rage over Flo’s betrayal and the harm she inflicted. She’ll think Flo was ruthless for helping with a bogus adoption and keeping her mouth shut for months. Flo will assure Steffy of her remorse, but that won’t be good enough. B&B spoilers say Steffy will want Flo to rot in prison, but that’s not going to happen thanks to Ridge’s decision.