The Bold and the Beautiful Spoilers: Phoebe’s ‘Birth Mother’ Turns On Reese – Will He Try To Silence Flo Permanently?

BY hellodrdavis on March 3, 2019 | Comments: one comment
Related : Soap Opera, Spoiler, Television, The Bold and the Beautiful 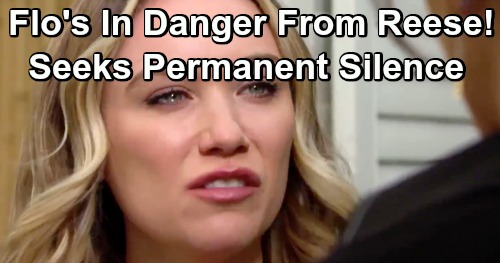 The Bold and the Beautiful spoilers tease that Florence “Flo” Fulton (Katrina Bowden) will soon approach her breaking point. She’s been feeling increasingly guilty about her part in Reese Buckingham’s (Wayne Brady) baby swap and adoption scam, and it’s only going to get worse from here.

Flo made the fateful decision to stay in Los Angeles and work at an establishment frequented by the Forresters and Spencers, and that’s going to lead to a very difficult situation.

Flo will not only encounter and meet Hope Spencer (Annika Noelle), which will produce massive guilt pangs itself, but she’ll bump into her old flame Wyatt Spencer (Darin Brooks), who will invite Flo to a dinner party with himself, Sally Spectra (Courtney Hope), Hope, and Liam Spencer (Scott Clifton). The dinner party will overwhelm Flo, as the more time she spends around Hope, the guiltier she’ll feel.

It looks like she’ll nearly crack at the dinner party and spill the whole sordid baby swap story, but at the last minute she’ll stop herself or get stopped by something or someone. But she’ll definitely have been on the verge of telling the truth and exposing herself, Reese, and Zoe Buckingham (Kiara Barnes).

Speaking of Zoe, she’ll be furious to find out that Flo put herself in the middle of a dinner party with Hope and Liam, and it looks like she’ll consult with Reese himself to help reign in Flo. Zoe’s been doing her best to keep Flo in check, but Flo’s really proving to be a loose cannon, and her guilt could get the better of her at any time.

According to B&B spoilers, Flo and Reese will soon have words directly, and an upset Flo will tell Reese that she’s no longer willing to keep his secret. That won’t go over well with Reese, but how far will he go to stop Flo? He’ll probably point out that her involvement in the scam could likely result in jail time for her, as a way of scaring her into submission.

But would Reese go to further extremes to silence Flo? Reese may get desperate; after all, his freedom and his medical license are at stake here. But would he actually go so far as to threaten to harm Flo to keep her quiet? Flo and Reese were once good friends, but now Flo’s becoming the enemy.

How far do you think Reese will go to keep Flo quiet? Stay tuned to the CBS soap and don’t forget to check CDL often for the latest Bold and the Beautiful spoilers, updates, and news.