The Bold and the Beautiful Spoilers: Upcoming B&B Deaths – Are Reese and Zoe Going To Be Killed Off?

BY hellodrdavis on May 20, 2019 | Comments: 2 comments
Related : Soap Opera, Spoiler, Television, The Bold and the Beautiful 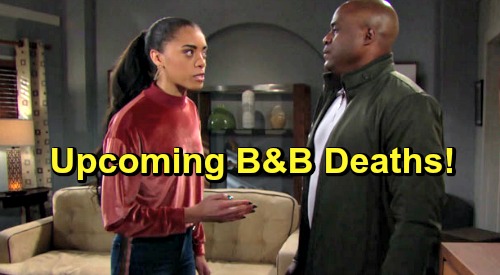 The Bold and the Beautiful spoilers tease that we may be looking at some big changes to the B&B cast in the coming weeks. And this information comes directly from Head Writer and Executive Producer Bradley Bell, who was recently interviewed by Michael Fairman. During their interview, Bell made a very telling statement during which he referenced more than one character dying on the show.

That’s a big statement, and it’s got us wondering exactly which characters might be dying in the near future. Of course, core and legacy characters are almost certainly off the list of possible candidates, otherwise departure rumors would be swirling at this point. But there are other characters who could feasibly be killed off in one fell swoop which would lead to some interesting plot developments.

We’re thinking specifically of Reese Buckingham (Wayne Brady) and Zoe Buckingham (Kiara Barnes). Not that we want to see the demise of these characters, but we could certainly see their sudden deaths working in the context of the current storyline. Reese and Zoe are two of four people who know about the baby swap, and getting rid of them would cause some big time drama for the remaining two secret-keepers.

Of course, the other two people who know that Phoebe Forrester (Isabella de Armas and Rosalind Aune) is actually Beth Spencer are Shauna Fulton (Denise Richards) and Florence “Flo” Fulton (Katrina Bowden). It would be great drama if Reese were to come back to LA, only to be killed in, say, a car accident along with Zoe, leaving Shauna and Flo as the only people who know about Beth.

Imagine what would happen with Flo and Shauna without Reese and Zoe in the picture. Flo would still struggle with guilt, but she would only have her mother to reign her in when she feels like coming clean. And at that point, coming clean wouldn’t serve to punish Reese, which Flo has been concerned with. It would create an interesting situation for Shauna and Flo for sure.

It will be interesting to see what happens with this storyline going forward, and whether the deaths that Bell referenced will happen as we’ve speculated. What do you think? Will Reese and Zoe be the next to die on B&B? Stay tuned to the CBS soap and don’t forget to check CDL often for the latest Bold and the Beautiful spoilers, updates, and news.