The Bold and the Beautiful Spoilers: Sally Left Heartbroken Once Again – Wyatt Feels Sorry for Flo After Arrest and Jail 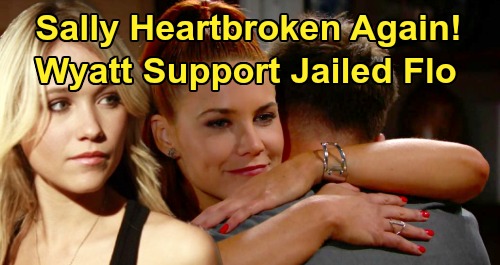 The Bold and the Beautiful (B&B) spoilers tease that Wyatt Spencer (Darin Brooks) will take a page from his brother’s playbook. Liam Spencer (Scott Clifton) is the resident waffler on B&B, but Wyatt’s starting to do a little of that himself these days. He seems poised to get back together with Sally Spectra (Courtney Hope) and leave Florence “Flo” Fulton (Katrina Bowden) in the dust, but things aren’t always as they seem!

Wyatt now understands that Sally’s mistake was trivial compared to Flo’s whopper of a lie. The baby swap scheme was a massive secret that hurt plenty of people Wyatt cares about – including him. Wyatt put his faith in Flo and thought she was the honest girl she used to be. He put Flo up on his high-school sweetheart pedestal, but she took her inevitable fall.

Of course, Wyatt didn’t know how good he had it with Sally. This is their opportunity for a second chance, but Sally may be setting herself up for more heartbreak. During the week of August 19-23, The Bold and the Beautiful spoilers say Wyatt will start to feel sorry for Flo. As Flo’s forced to face the music, her pain and remorse will tug at Wyatt’s heartstrings.

Hope Forrester (Annika Noelle) and Ridge Forrester (Thorsten Kaye) will naturally remain furious with the fake birth mom. They’ll both want Flo to pay the price. In fact, Ridge will make sure that it happens, which likely means Flo’s arrest is coming up. Hope certainly won’t mind since Beth Spencer (River Davidson and Madeline Valdez) was kept from her for months.

Wyatt, on the other hand, will hate to see Flo suffering. Despite Flo’s mistakes, Wyatt will start to see the good in her again. Perhaps Wyatt’s mom will have a little something to do with that. Quinn Forrester (Rena Sofer) will take Flo’s side as the haters come at her, so she’ll be whispering in Wyatt’s ear along the way. She won’t want Wyatt to throw away this relationship forever.

Does that mean Sally will face heartbreak once more? It probably depends on if she lets herself get in too deep with Wyatt. If Sally grows closer to Wyatt while he becomes a Flo sympathizer, it could mean another devastating blow.