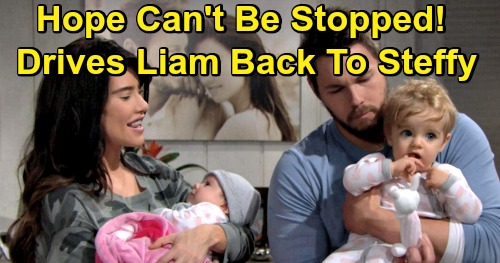 The Bold and the Beautiful (B&B) spoilers tease that Hope Spencer (Annika Noelle) will make a sudden and shocking decision. Later this week, Hope will drop a bomb that Liam Spencer (Scott Clifton) never saw coming. Despite Brooke Forrester’s (Katherine Kelly Lang) attempts to talk her out of this, Hope will insist that Liam belongs with Steffy Forrester (Jacqueline MacInnes Wood) and the girls.

Liam will be blindsided by Hope’s out-of-the-blue suggestion. This couple has obviously been through a lot since Beth Spencer “died,” but Liam thought they were handling it together. They’ve just been taking it one step at a time. Hope’s mood has even improved thanks to all the bonding she’s been doing with “Phoebe Forrester” (Isabella de Armas and Redford Prindiville).

That’s why it’ll come as a huge shock to Liam when Hope pushes him toward his ex. He’ll always care about Steffy, but he’s made it clear that he’s all in on his marriage to Hope. Unfortunately, Hope will think they should put their marriage behind them. She’ll feel like Steffy can give Liam the family he really wants and make all his dreams come true.

Hope just doesn’t think kids are really in the cards for her. She’d rather see Liam happy with Steffy, Phoebe and Kelly Spencer (Zoe Pennington and Chloe Teperman). The Bold and the Beautiful spoilers say Hope will want Liam to understand her perspective. She’ll assure Liam that she’s trying to help him with this decision, not hurt him. Hope will feel like everything will work out for the best in the long run.

B&B fans can expect Liam to shut down Hope’s plan immediately. He’ll refuse to accept that this is really the end. The Bold and the Beautiful spoilers say Liam will fight for his future with Hope. He’ll know Hope’s grief is influencing her actions, so he’ll do whatever he can to show his love. Liam won’t like the idea of being forced out of the picture, especially when Hope needs him more than ever.

The Bold and the Beautiful spoilers state that Hope will decide the fate of her relationship on next week’s new B&B episodes, February 25 – March 1. Will she stick to her divorce plan? It makes the most sense for drama’s sake! It’d be great to see Liam slowly accept Hope’s suggestion and build the family she’s talking about. That way things could blow up big time once the truth about Beth comes out.

It sounds like some exciting scenes are in the works. We’ll give you updates as other B&B news comes in. Stay tuned to the CBS soap and don’t forget to check CDL often for the latest Bold and the Beautiful spoilers, updates, and news.