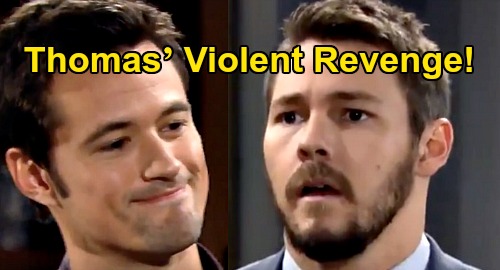 The Bold and the Beautiful (B&B) spoilers tease that Thomas Forrester (Matthew Atkinson) seems poised to spiral out of control again. B&B fans know Thomas has developed a pattern when it comes to Hope Logan (Annika Noelle). Thomas’ obsession with Hope always drives him down a path that grows darker and darker.

After Thomas learned the truth about Beth Spencer (River Davidson and Madeline Valdez), he genuinely thought about coming clean. Thomas isn’t all bad; he just has sinister impulses sometimes and doesn’t do well when he listens to them. Once Thomas committed to the Beth cover-up, his obsession took some dangerous turns.

Of course, Thomas once again went too far by chasing Hope in an effort to earn her forgiveness. That left Brooke Forrester (Katherine Kelly Lang) to misunderstand the situation and shove Thomas off the cliff. Thomas once again got angry and pushy after Hope’s custody manipulation. That led to his unwanted advances and acid vat tumble – although it actually turned out to be cleaning solution.

It’s a familiar tale by now: Thomas’ obsession grows to the point where he goes off the rails and danger erupts. That’s the way the story seems to be heading now as well. However, Thomas may not be the one paying the price this time. He’s already taken two major falls, so someone else needs to be the injured party.

Brooke is certainly an option since Thomas hates her guts and fantasized about her death. Sally Spectra (Courtney Hope) could also get caught up in some chaos. She’s made a troubling comment or two that could point to a terrible fate. Even Hope could be in grave danger since that’s what Brooke and Liam Spencer (Scott Clifton) keep repeating.

However, let’s focus on Liam for a minute. He’s working on a plot that could destroy Thomas’ dreams, so what happens if he succeeds? What will Thomas do if Liam puts the final nail in the “Thope” coffin and eliminates any chance of him being with her? Thomas could easily go off the deep end and seek violent revenge.

It’d be a great setup for Hope and Steffy to play the blame game in the aftermath. They could be at war while Liam’s comatose and deliver some juicy drama. Regardless, The Bold and the Beautiful spoilers say Liam had better watch his back! Thomas isn’t going to like it one bit if Liam costs him Hope and possibly custody of Douglas Forrester (Henry Joseph Samiri), too. He could have nothing left to lose!

Do you think Liam will emerge victorious only to face Thomas’ retaliation? Will Thomas prove he’s still as dangerous as Liam and Brooke claim? The Bold and the Beautiful spoilers say some twists and turns are on the way. We’ll give you updates as other B&B news comes in. Stay tuned to the CBS soap and don’t forget to check CDL often for the latest Bold and the Beautiful spoilers, updates and news.