The Bold and the Beautiful Spoilers: Steffy Gets New Man After Liam and Sally Find Love – ‘Steam’ Reunion Ditched? 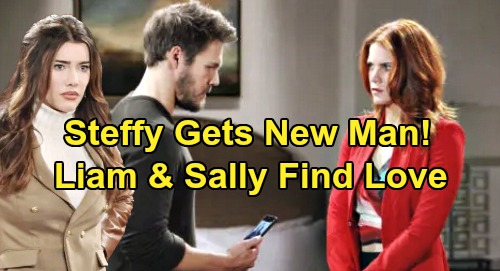 The Bold and the Beautiful (B&B) spoilers reveal that fans are still holding out hope for Steffy Forrester’s (Jacqueline MacInnes Wood) future. Although Steffy and Liam Spencer (Scott Clifton) still have some supporters, a lot of them have abandoned ship after years on the waffling merry-go-round. It feels like a “been there, done that” situation at this point.

Of course, plenty of fans are also over “Lope” for the same reason. Liam has gone back and forth between Steffy and Hope Logan (Annika Noelle) too many times. How can either one of them ever really trust Liam to remain loyal? Perhaps there’s a way to break the cycle for all parties involved – and it could start with Sally Spectra’s (Courtney Hope) resurfacing feelings.

B&B viewers know Sally inadvertently called Wyatt Spencer (Darin Brooks) by his brother’s name. She insisted it was a simple slip of the tongue and nothing more, but is that true? It could actually be a hint about what’s to come. Sally pointed out that Liam was a light during a dark time, so maybe he could be a light once again. After all, Sally will surely need a little light in her life if Wyatt dumps her for “Flo” Fulton (Katrina Bowden).

Liam and Sally shared some nice conversations as well as a kiss, but that was the extent of it. Maybe The Bold and the Beautiful should give this potential pairing a real shot. It might be interesting to see what kind of chemistry Liam and Sally would have if they went all in. At least it’d be something besides the usual Hope and Steffy bouncing.

It’s clear that Flo and Wyatt are endgame, which means Sally will need another romantic option. Since every woman in her age bracket seems to end up loving Liam, Sally may open her heart to him next. Liam declared that he was done battling his brother, but that may have been a soapy way of suggesting the battle was just beginning. It would set up more tension if Liam and Wyatt started trading love interests again.

If Liam’s busy with Sally, then Steffy’s free from the “Steam” chains B&B puts on her. It opens the door for Steffy to get the new man that Steffy fans have been hoping for. Would you be on board with a Liam and Sally couple if it led to Steffy getting a new hunk?