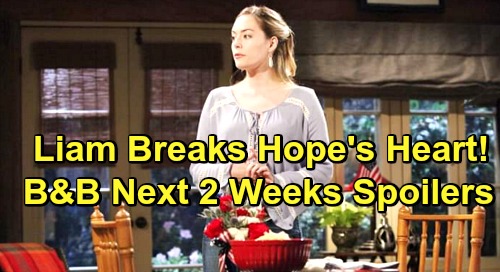 The Bold and the Beautiful (B&B) spoilers for the next two weeks tease that some surprises are in store. During the week of July 1-5, both Hope Logan (Annika Noelle) and Steffy Forrester (Jacqueline MacInnes Wood) will be taken aback. Liam Spencer’s (Scott Clifton) drugged drink will leave him behaving a bit out of character, so the women in his life won’t know what to make of it.

When Liam shuts Hope out, Thomas will suggest it’s for the best. He’ll contend that Liam’s just showing Hope where his heart really lies. Afterward, Liam will flatter Steffy and reel her in to familiar territory. The Bold and the Beautiful spoilers say Steffy and Liam will make love, but confusion and complications will follow.

Liam will recall their steamy night together, but the motives behind how they got there will be a bit hazy. Nevertheless, Liam will be glad he ended up rekindling his spark with Steffy. He’ll just hate the part where he has to tell Hope. Of course, Liam doesn’t really have to, but he’ll believe coming clean is the right call. He’ll let Hope know he made love to Steffy, so her heart will quickly shatter.

The Bold and the Beautiful spoilers say Hope and Liam will have a powerful scene as they accept where they’re at now. They wanted a life together with Beth Spencer, but they know things have changed. As for Steffy, she’ll confess her growing feelings to Ridge Forrester (Thorsten Kaye) and wonder what he thinks. Ridge will naturally be thrilled over the idea of a fully reunited “Steam” family.

However, Steffy will also catch on when it comes to Thomas’ intense manipulation. She’ll call Thomas out for his efforts to destroy any remaining connection between Liam and Hope. Thomas may argue that Steffy should be grateful. He’ll act like he’s innocent in all this and contend that he’s just helping Hope see what her future should look like.

Later, Thomas will rope Douglas Forrester (Henry Joseph Samiri) into a marriage proposal plan. With the right coaching, Douglas will be all set to ask Hope to be his new mommy and become his dad’s wife. B&B fans can expect a floored Hope to struggle after the popped question. She’ll be in a daze, but Thomas will step in and continue to speed this process along.

Back with Liam, he’ll reflect on last Fourth of July when Hope revealed she was pregnant. Steffy will provide comfort since Liam’s now facing a life without Beth – or so he thinks! Beth is actually still in Liam’s life, but she was illegally adopted as “Phoebe Forrester” (River Davidson and Madeline Valdez).

Xander Avant (Adain Bradley) is one of the secret-keepers, but he’ll keep battling a guilty conscience. He’ll also suspect Thomas isn’t sharing the whole story when it comes to Emma Barber’s (Nia Sioux) death. That’s why Xander will seek Charlie Webber’s (Dick Christie) help with an important task. He may hope some security footage will reveal more info.

During the week of July 8-12, Xander’s mission will continue. The Bold and the Beautiful spoilers state that Xander will seek additional clues and hope he can prove Thomas was involved in Emma’s demise. It’ll be murder in Xander’s mind, so he won’t let this go. B&B buzz indicates that Xander’s search for the truth could lead to his own death at Thomas’ hands.

Finally, Thomas will prepare for a more adult proposal. Douglas’ efforts will set the stage for the real deal, but Liam and Brooke Forrester (Katherine Kelly Lang) won’t approve. They’ll plan to thwart Thomas’ proposal, but Ridge will put a stop to that. He’ll think they need to let Hope and Thomas have the life they’re meant to have together.