The Bold and the Beautiful Spoilers: Liam and Steffy’s Lovemaking Afterglow – Steam Moves Towards Marriage as Passion Grows

BY Heather Hughes on June 29, 2019 | Comments: one comment
Related : Soap Opera, Spoiler, Television, The Bold and the Beautiful 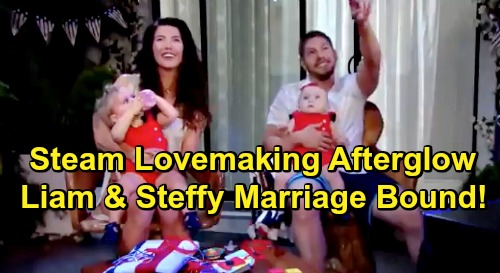 The Bold and the Beautiful (B&B) spoilers tease that Liam Spencer (Scott Clifton) and Steffy Forrester (Jacqueline MacInnes Wood) will have a lot to process. After drugged Liam pulls Steffy closer, they’ll make love following their latest beach bash. Since Liam will be letting his guard down with her, Steffy will want to let hers down, too.

After a night of steaminess, Liam will wake up a bit confused. He’ll remember their reunion in the bedroom and everything that came before it, but he’ll be baffled by his own behavior. Liam won’t really understand some of moves he made, especially pushing Hope away when she was already fragile.

However, Liam will definitely appreciate the renewed closeness he’s found with Steffy. They’ll decide they should talk about what just happened, so it’ll bring some sweet moments of honesty. The Bold and the Beautiful spoilers say there’ll definitely be an afterglow going on. Liam will acknowledge his deep feelings for Steffy and perhaps suggest they never really went away.

Still, part of Liam will battle guilt over doing this so quickly after splitting from Hope. Hurting her is the last thing Liam wants to do. Since they’ll be having an honesty hour here, Liam may admit that this is a little complicated for him. Steffy will get that everyone’s changed and has been through a lot – including her. Although Steffy loves Liam, her world is quite different than it was when they were last together.

B&B fans will recall how Steffy ultimately chose herself and opted to concentrate on other things. Kelly Spencer (Zoe Pennington) and “Phoebe Forrester” (River Davidson and Madeline Valdez) are her priority now. Steffy also has her career to think about, so they’ll have to figure everything out as they go.

The Bold and the Beautiful spoilers say this will certainly mark a turning point for Liam and Steffy. They won’t rush into anything too serious, but they’ll start to see their situation in another light. Steffy will end up seeking advice from Ridge Forrester (Thorsten Kaye) later as she deals with her growing love.

It sounds like “Steam” will take some big steps forward during the week of July 1-5. We’ll give you updates as other B&B news comes in. Stay tuned to the CBS soap and don’t forget to check CDL often for the latest Bold and the Beautiful spoilers, updates and news.