BY hellodrdavis on June 28, 2019 | Comments: 2 comments
Related : Soap Opera, Spoiler, Television, The Bold and the Beautiful 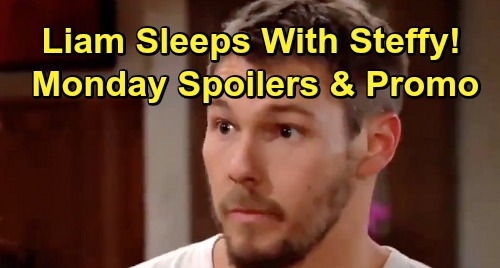 The Bold and the Beautiful spoilers for Monday, July 1, tease that Thomas Forrester’s (Matthew Atkinson) actions will cause some serious consequences for Liam Spencer (Scott Clifton), Hope Logan (Annika Noelle), and Steffy Forrester (Jacqueline MacInnes Wood). As B&B viewers know, Thomas just drugged Liam’s margarita, and he said silently said an ominous “goodbye” to Liam after he did.

According to B&B spoilers, the drugs will soon surge through Liam’s system and will cause some erratic behavior on his part. It’s not clear exactly what Thomas is intending for the drugs to accomplish, but it seems that Liam’s behavior will get intense and will play right into Thomas’ hand.

Of course, what Thomas wants is for Liam to get back together with Steffy, so that Hope feels free to move on with him and Douglas Forrester (Henry Joseph Samiri). He’s not satisfied to wait around for Hope to naturally get over Liam and embark on a relationship with him; he wants it to happen right now.

Well, according to B&B spoilers, Hope will have a big reaction to Liam’s behavior while he’s under the influence of the drugs. Exactly what Liam does with respect to Hope remains to be seen, but The Bold and the Beautiful spoilers say that later in the week of July 1-5 Liam will admit to having had a night of STEAMy passion with Steffy!

The Bold and the Beautiful spoilers also indicate that Liam’s behavior with respect to Steffy will be affected by the drugs. Steffy and Liam will wind up making love later in the evening – something that will later make Thomas very happy and totally devastate Hope.

Meanwhile, on the new B&B episode on Monday, July 1, Wyatt Spencer (Darin Brooks) and Florence “Flo” Fulton (Katrina Bowden) will have something big to celebrate. Flo has just accepted Wyatt’s invitation to move into his beach house and the couple couldn’t be more thrilled.

Although Flo will still have some guilt pangs here and there about her role in Reese Buckingham’s (Wayne Brady) baby scam and her suspicions about how Emma Barber (Nia Sioux) died, she’ll be happy as she and Wyatt celebrate their new living situation by making love.

Of course, her guilt could start to get the best of her if Wyatt starts gushing again about how honest and trustworthy she is. That’s sure to make Flo start worrying about what will happen to her life if the baby secret ever comes out. But for now, she’ll enjoy her time with Wyatt and their big celebration.