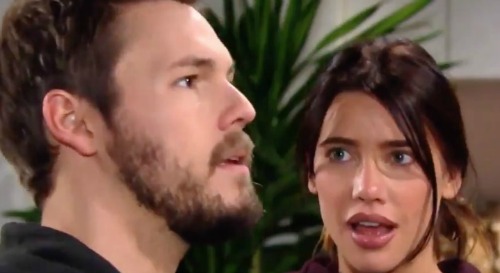 The Bold and the Beautiful (B&B) spoilers reveal that one plot point has stirred up some controversy, and it’s left Scott Clifton (Liam Spencer) stuck in some fan wars. Thomas Forrester (Matthew Atkinson) scored drugs from Vincent Walker (Joe LoCicero) and has been assured they’ll do the trick. His plan is make Liam to fall into bed with Steffy Forrester (Jacqueline MacInnes Wood) using the pills.

We can all agree it’s a despicable move on Thomas’ part, but the real controversy is stemming from Clifton’s comments in the new issue of Soap Opera Digest. “He’s not stumbling, crazy-intoxicated,” Clifton said. “He’s just lost some of his inhibition.” Clifton talked about how the next morning, Liam is “foggy at first, to be sure,” but insisted that “Liam absolutely remembers. It was completely consensual.”

When viewers started complaining about the rape storyline and Clifton’s reaction to it, he advised them to hold off for a bit. “Guys, wait until you see the episode before you rush to judgement,” Clifton said on Twitter. “The ‘drug’ in question is not Rohypnol or any date-rape related substance.”

Clifton also indicated that not all drugs impair judgement or a person’s ability to offer consent. “Don’t be one of those people who *look* for reasons to be outraged,” Clifton added. There’s a lot to unpack here. This is tricky since Clifton is right that some drugs don’t affect consent. A person on antidepressants for example can definitely consent to having sex with his or her partner.

However, Liam isn’t voluntarily taking an acceptable prescription and that’s a problem. Without that lowered inhibition, Liam also wouldn’t be sleeping with Steffy – at least not at this point in the story. Is Liam giving true consent if he’s been given a drug that alters what he would normally do? Many Bold and the Beautiful fans don’t think so.

There’s another B&B social media battle and it’s one involving Liam’s love interests. Clifton touched on that in his Twitter comments, too. “Trust me, I’m not afraid of backlash against Liam,” Clifton said. “In fact, if you’re a Hope fan, then my point entails that Liam is completely *culpable* for his decision to have sex with Steffy.”

Liam is free to do whatever he wants since Hope pushed him away and they got an annulment. Still, is having sex with Steffy at this point – as in now and not in a few weeks or months – what Liam wants or what Thomas wants? Liam isn’t in the state of mind he’d normally be in due to the pills, which he didn’t choose to take. That’s something important to remember.

Of course, there’s one person who’s absolutely not responsible and that’s Steffy. She has no idea what Thomas has been up to; she just knows Liam wants to have sex and goes for it. There’s no guilt on her part. Things are certainly consensual as far as Steffy’s concerned, so there’s no need to drag her into it.

Guys, wait until you see the episode before you rush to judgement. The “drug” in question is not Rohypnol or any date-rape related substance.