BY Heather Hughes on June 28, 2019 | Comments: one comment
Related : Soap Opera, Spoiler, Television, The Bold and the Beautiful 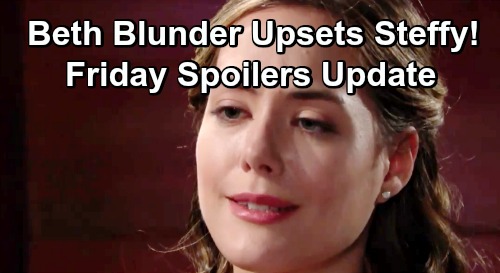 The Bold and the Beautiful (B&B) spoilers update for Friday, June 28, tease that Hope Logan’s (Annika Noelle) beach party blunder will bring drama. She just referred to “Phoebe Forrester” (River Davidson and Madeline Valdez) as Beth, so that’ll be awfully upsetting to those around her. Thomas Forrester (Matthew Atkinson) will be particularly concerned by Hope’s heartbreaking slipup.

Hope’s still struggling to let go of her daughter and feels a deep bond with “Phoebe.” That led to this unfortunate mistake, but Thomas knows there’s more to the story. “Phoebe” really is Beth, so he’ll freak out about the secret potentially getting out. He won’t want Hope giving herself or the others any ideas here. Thomas doesn’t need people putting the puzzle pieces together and developing suspicions.

As a result, Thomas will undoubtedly pipe up to set Hope straight. He may insist that “Phoebe” is Steffy Forrester’s (Jacqueline MacInnes Wood) little girl, not Hope’s. Thomas will likely try to get Hope’s mind back on Douglas Forrester (Henry Joseph Samiri) and argue that this proves his point. He doesn’t think it’s good for Hope to spend too much time around “Phoebe.”

For once, Liam Spencer (Scott Clifton) might agree with Thomas. He’ll sense that Hope remains in great pain and wish there was something he could do to help. Steffy will be rattled by Hope’s gaffe, but she’ll surely offer reassurance. She won’t want to make Hope feel worse than she already does. All the partygoers will just have to push through the awkwardness Hope’s error brings and move on.

Other Bold and the Beautiful spoilers say Wyatt Spencer (Darin Brooks) will choose to seize the day. If Emma Barber’s (Nia Sioux) death taught these characters anything, it’s that life can be snatched away in an instant. Wyatt won’t want to let another second go to waste. He’ll think he should take advantage of the happiness he’s found with Florence “Flo” Fulton (Katrina Bowden), so he’ll make a major decision.

B&B fans will see Flo move in with Wyatt next week, July 1-5, which means he should get the notion on Friday. Wyatt will bring up the topic of living together soon enough, so The Bold and the Beautiful spoilers say Flo will accept the offer and grow even closer to the man of her dreams. Too bad a full-blown nightmare’s looming once Wyatt learns Flo’s secret!

Flo seems poised to lose everything she cares about down the road, so stay tuned for all the action. We’ll give you updates as other B&B news comes in. Stick with the CBS soap and don’t forget to check CDL often for the latest Bold and the Beautiful spoilers, updates and news.