The Bold and the Beautiful Spoilers: Xander’s Mission Ends with His Funeral – Thomas Murders Over Evidence Hunt? 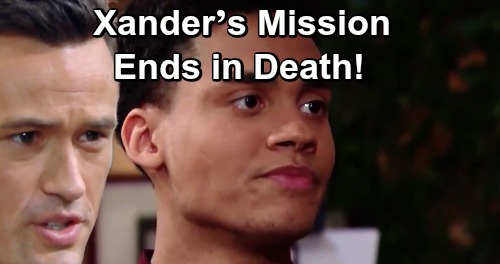 The Bold and the Beautiful (B&B) spoilers tease that Xander Avant (Adain Bradley) won’t be able to let Emma Barber’s (Nia Sioux) death go. She meant a lot to him, so he’ll feel like he owes her a mission to find the truth. Xander believes Thomas Forrester (Matthew Atkinson) is guilty, so he’ll set out to prove it. However, he’ll need a little help to make it happen.

During the week of July 1-5, Xander will turn to Charlie Webber (Dick Christie) for help. He’ll hope Charlie can come through for him on a favor. Of course, it’s risky to seek assistance from someone outside the secret circle. If Thomas finds out, it could mean big trouble for Xander.

Nevertheless, The Bold and the Beautiful spoilers say that’ll be a gamble Xander’s willing to take. He’ll feel like Thomas is a monster who must be stopped. Xander may worry that he won’t accomplish much without evidence. He’ll have to dig deep if he wants to ensure Thomas goes down for his role in Emma’s demise.

Thomas didn’t technically murder Emma and would’ve preferred if she’d kept her mouth shut like the others. Still, B&B fans know Thomas rode Emma’s bumper and left her in a shaky state as a result. He made it difficult for Emma to stay in control of her vehicle, and she paid with her life.

Xander doesn’t know exactly how it all went down, but he may think he can at least prove Thomas followed Emma. That might be where Charlie comes in. Xander might lie about something else he wants to look at on the parking lot security tapes. His goal could be to get a clear shot of Thomas peeling out behind Emma’s car.

Whatever the case, The Bold and the Beautiful spoilers say Xander will gather up all the clues he can. He’ll be plotting Thomas’ takedown, which could be extremely dangerous. Since another death is likely coming up soon, Xander may sealing his own fate. The difference is this time it may be a full-fledged homicide!

Will Thomas murder Xander if he keeps this up? Will Xander’s hint hunt end with his funeral? We’ll give you updates as other B&B news comes in. Stay tuned to the CBS soap and don’t forget to check CDL often for the latest Bold and the Beautiful spoilers, updates and news.