BY Heather Hughes on June 27, 2019 | Comments: one comment
Related : Soap Opera, Spoiler, Television, The Bold and the Beautiful 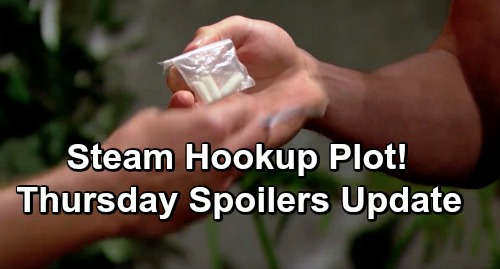 The Bold and the Beautiful (B&B) spoilers update for Thursday, June 27, tease that we’ll see more tension between Brooke Forrester (Katherine Kelly Lang) and Ridge Forrester (Thorsten Kaye). They’ll clash over what Hope Logan’s (Annika Noelle) future should look like – and Hope herself will get stuck in their conflict. She’ll end up in the middle as Brooke battles with Ridges over what’s best for her daughter.

Of course, Ridge will consider what’s best for his son and grandson, too. He knows Thomas Forrester (Matthew Atkinson) longs be with Hope romantically. Ridge just won’t see what’s so wrong about Thomas, Hope and Douglas Forrester (Henry Joseph Samiri) being a family. It might be a little soon for Hope to move on, but Ridge will still think Hope should embrace a life with Thomas.

Brooke, on the other hand, will be adamant that Thomas has an obsession. She’ll be unsettled by Thomas’ intense pursuit and all the pressure Hope’s facing. B&B spoilers say Brooke won’t think it’s right, so that’ll bring more friction as Ridge defends Thomas. As for Hope, she’ll simply want to promote peace somehow. Hope’s just trying to stay afloat as the grief waves keep striking fast and hard.

Other Bold and the Beautiful spoilers say Thomas will move forward with a sneaky plan. He knows Hope still loves Liam Spencer (Scott Clifton), so he’ll try to convince them both to move on. Thomas will purchase some drugs from a former colleague named Vincent Walker (Joe LoCicero). He’ll get some heavy-duty stuff with the goal of drugging Liam and pushing him into bed with Steffy Forrester (Jacqueline MacInnes Wood).

Thomas will feel like he merely has to release Liam’s inhibitions. Since Liam’s always been a waffler, Thomas won’t expect this to be hard. The Bold and the Beautiful spoilers say Thomas will prepare to carry out the next phase of his plot, but there’ll be a problem. It turns out someone will spot Thomas with Vincent, so that could become an issue later.

Nevertheless, Thomas will indeed drug Liam and spark the “Steam” hookup he’s rooting for next week. We’ll give you updates as other B&B news comes in. Stay tuned to the CBS soap and don’t forget to check CDL often for the latest Bold and the Beautiful spoilers, updates and news.