The Bold and the Beautiful Spoilers: Liam Vents to Steffy, Feels Hope’s Too Close to Thomas – ‘Steam’ Bond Irresistible 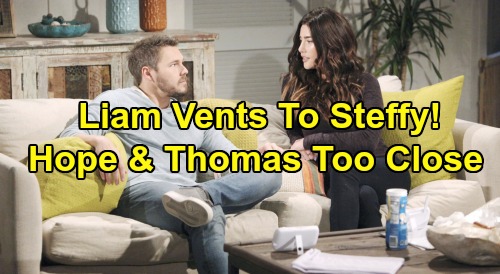 The Bold and the Beautiful (B&B) spoilers tease that Liam Spencer’s (Scott Clifton) concerns about Thomas Forrester (Matthew Atkinson) will intensify. Hope Logan (Annika Noelle) will come clean about that night at Forrester Creations, but it doesn’t look like Liam will hold her secrets against her. He’ll be more focused on Thomas’ disturbing behavior and the fact that Hope’s tied to him forever.

Liam will remain worried about this custody arrangement and Hope being intertwined with Thomas through Douglas Forrester (Henry Joseph Samiri). He’ll be appalled over Thomas’ indecent proposal and his decision to let Hope believe he was dead. Liam will feel like Thomas has proven that he’s still out of control. He’ll get Hope’s need to protect Douglas, but he’ll be fearful over their co-parenting strategy at the same time.

The Bold and the Beautiful spoilers say Hope may believe they’ve reached understanding. After Thomas and Hope fill Douglas in on her official mom status, the kid will be over the moon. It could really drive the point home that Douglas needs them both. Hope might think they can work through this rough patch and be the parents Douglas deserves.

Hope may assure Liam that she can be careful and won’t let Thomas get too close. Of course, the game could change if Hope caves to Thomas’ career pressure. During the week of December 2-6, B&B spoilers say Thomas will push Hope to work with him at FC. He’ll think they’d make an awesome team and will probably impress her with his latest designs. It probably won’t be long until Hope and Thomas are indeed teaming up.

The further Hope sinks into Thomas’ orbit, the more concerned Liam will be. This is bound to cause tension for Hope and Liam in the coming weeks. That’ll give Steffy Forrester (Jacqueline MacInnes Wood) a chance to serve as a sounding board for Liam. It’ll be tricky since Thomas is Steffy’s brother, but she won’t want Liam feeling like he has to deal with this alone.

Besides, Steffy can’t deny that Thomas has issues. She’ll even call Thomas out for pushing Hope to make love to him in exchange for custody. Steffy will be appalled that Thomas would try to bargain his own son for Hope’s body. She’ll inevitably understand why Liam’s fretting about what Thomas will pull next.

Liam will feel like Hope’s getting too close to Thomas, but he’ll be busy getting too close to Steffy! The Bold and the Beautiful spoilers say Steffy will draw Liam in even more, so their connection could prove difficult to resist. We’ll give you updates as other B&B news comes in. Stay tuned to the CBS soap and don’t forget to check CDL often for the Bold and the Beautiful spoilers, updates and news.