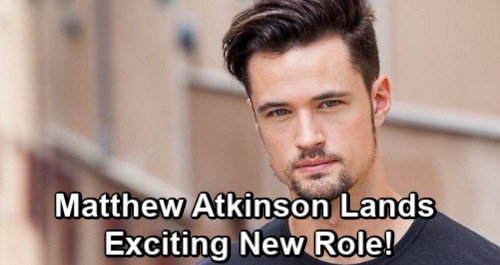 The Bold and the Beautiful spoilers has some great news to pass on about a popular B&B star. Matthew Atkinson, who portrays Thomas Forrester on the CBS soap, has landed a role in an upcoming movie called “The Party Planner” that was written and directed by Jake Helgren.

The movie is a thriller with the following synopsis: “When young art gallery owner and mother Kayla Anderson finds herself drowning in work and in need of help planning her daughter Kerry’s big upcoming Sweet Sixteen bash, she hires pretty, spited party planner Lindy Shores to help out, having no clue that Lindy is unstable and recently murdered her husband, and will stop at nothing to make Kerry a daughter of her own.”

Atkinson will play a character named Griff Shores in the film, but there’s no word currently on the nature of the part or his character’s role in the plot of the story.

He’ll be in good company in the movie, which also stars Linsey McKeon, Katrina Begin, and Cathryn Dylan in the starring roles.

Atkinson is currently doing a great job of playing the conniving Thomas on B&B. He’s recently taken his manipulative ways to the next level, after he discovered the baby swap secret and decided to keep the secret to himself.

And according to B&B spoilers, his next move will be to strong-arm Florence “Flo” Fulton (Katrina Bowden), Xander Avant (Adain Bradley), and Zoe Buckingham (Kiara Barnes) into keeping the secret as well.

The Party Planner Is A Thriller

Fans of Atkinson will have to wait to see whether his character in “The Party Planner” is anything like Thomas. Given that the movie is a thriller, he could be in a dark role, or it could be drastically different type of role, such as a victim. Either way, it will be fun to see Atkinson in new role.

“The Party Planner” is set for a 2020 release. Are you looking forward to seeing Atkinson in his new role?

Feels like I’ve got ice cold water running through my veins after a winter sesh in the Pacific. Also seems appropriate photo of the recent Thomas Forrester developments. 😄 Photocred: @cali_girl_gone_maine