The Bold and the Beautiful Spoilers: Maya and Carter Turn Up the Heat – Goodbye Rick, Hello Hot Carter Reunion?

BY Heather Hughes on October 13, 2019 | Comments: one comment
Related : Soap Opera, Spoiler, Television, The Bold and the Beautiful 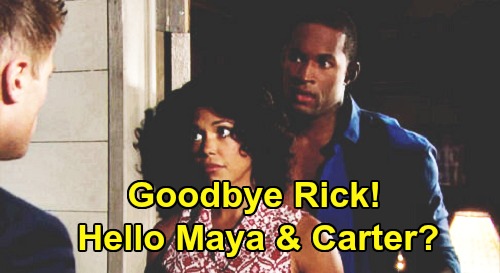 The Bold and the Beautiful (B&B) spoilers tease that some exciting developments are on the way. There’s a lot going on with Katie Logan’s (Heather Tom) health drama and Florence “Flo” Fulton’s (Katrina Bowden) role in that.

There’s also plenty of drama surrounding Thomas Forrester (Matthew Atkinson), which includes his efforts to drive Brooke Forrester (Katherine Kelly Lang) and any other Logans out of the picture.

Bold And The Beautiful Needs Another Steamy Couple

However, it won’t be long until things shift and new storylines are needed. One thing that would certainly benefit B&B is another steamy couple. They’ll have their chance to deliver one – most likely during the tail end of the fall drama. The Bold and the Beautiful spoilers say Maya Avant (Karla Mosley) will get back in the action eventually. A new direction could be in the works for this character.

B&B fans know Maya and Rick Forrester (Jacob Young) got a divorce, which was a bizarre move, considering Maya’s last return stint didn’t last long. What was the point of splitting Rick and Maya up if they were just going to be off canvas anyway?

Perhaps a storyline got delayed and will finally come into play down the road. Could Carter Walton (Lawrence Saint-Victor) reunite with Maya in the months ahead?

Carter Walton And Maya Avant Could Bring Some Great Chemistry

The Bold and the Beautiful spoilers say we’ll learn what’s next for Rick as well, but that could mean he’s moving on with a new woman elsewhere. Closure may be brewing for Rick and Maya, which could set up what’s next with Carter.

Many B&B viewers have been eager to see Saint-Victor get airtime. The more hunks, the merrier – especially if they can act! Carter and Maya could bring some great chemistry and heat if they have the chance.