The Bold and the Beautiful Spoilers: Raging Hope’s Demand Stuns Liam – Insists He Should Tell Steffy Hope Is His Future 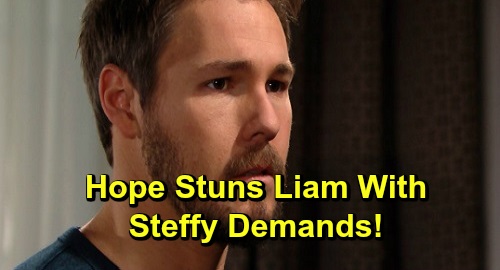 The Bold and the Beautiful (B&B) spoilers tease that Hope Logan (Annika Noelle) will get fierce. B&B fans know Hope’s whole world fell apart after she lost Beth Spencer (River Davidson and Madeline Valdez). She completely crumbled when she believed her little girl was dead. Hope was so broken that she pushed Liam Spencer (Scott Clifton) away despite her great love for him.

However, everything changed after Beth was revealed to be alive. Hope reclaimed her daughter and her marriage. Her family’s back on track, so she has no intention of losing everything again. That’s why Hope will flip out at the first sign of trouble. She’ll go ballistic after she finds out Steffy Forrester (Jacqueline MacInnes Wood) has been sneaking around with Liam – albeit in a fairly innocent manner.

The Bold and the Beautiful spoilers say Hope will disapprove of the messages exchanged between Hope and Liam. The evidence on Liam’s phone will set her off. Liam’s secret visit to Steffy’s place will also come to light. Hope will be incensed to learn Liam took Beth to see Steffy without her knowledge. She’ll feel like Liam and Steffy’s bond is growing too strong, so she’ll try to nip it in the bud.

During the week of October 14-18, Hope will go head-to-head with her rival. B&B fans can expect a shouting match as Hope and Steffy argue about who lost more. Hope will think she went through plenty, but Steffy may counter that Hope got the fairytale ending. She’ll get that Hope suffered, but that suffering is over. Steffy is the one who’s stuck in sorrow now.

By the end of this confrontation, Hope will realize Steffy isn’t over Liam and may be trying to get him back. She’ll confront Liam during the week of October 21-25 and make a startling demand. Hope will contend that it’s time for Liam to set Steffy straight. She’ll push Liam to pay Steffy another visit sans Beth and make it clear that “Steam’s” done.

Liam won’t be keen on being so blunt, but Hope will feel it’s necessary. She just won’t think there’s any other way to get through to Liam’s ex. Hope will argue that she’s Liam’s future and that’s exactly what he should tell Steffy. She’ll rev up the pressure, but will Liam do what she wants?